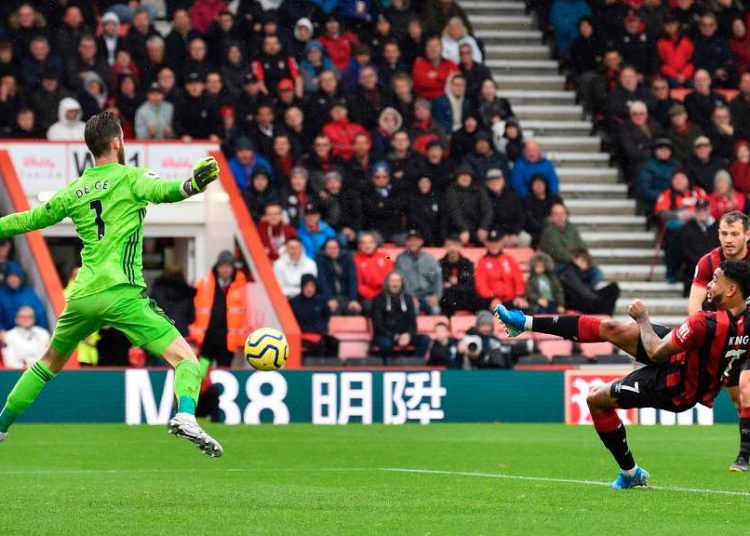 Manchester United’s mini-revival has come to a dour end with Bournemouth inflicting a 1-0 defeat on them at the Vitality Stadium.

Both sides were far from their best as they had to deal with the very windy conditions but the Cherries were a good value for their win having looked more of a threat for most of the game.

To make matters worse for Man United, it was a former player who scored the winning goal in Josh King with an acrobatic effort just before half-time.

Earlier in the game, Anthony Martial went down in the box but was denied a penalty. The incident was looked at by VAR.

The visitors came close with efforts from Mason Greenwood and Scott McTominay in the closing stages but Ole Gunnar Solskjaer’s men showed a real lack of urgency in what is their fourth Premier League defeat of the season.

It seemed like Man United had turned a corner following their three away victories inside a week including a 2-1 triumph over Chelsea at Stamford Bridge in the Carabao Cup.

But they were pretty pedestrian and lacked ideas going forward for most of the game.

The visitors did start brightly though, with Andreas Pereira missing a good chance to give them the lead on three minutes but the midfielder was unable to connect with a low Dan James cross. James himself had an effort which whistled just wide of the post later on.

Man United then had a penalty shout turned away when Martial went down in the box surrounded by Bournemouth players but referee Chris Kavanagh did not point to the spot. The incident was reviewed by VAR but it was deemed that a clear and obvious error was not made.

And Bournemouth took the lead on the stroke of half-time with a fine piece of improvisation from King but also from some questionable defending by the Man United defenders.

The forward, who played for the Red Devils at youth level and started his professional career there, chested down Adam Smith’s cross before hooking the ball up and smashing it home beyond De Gea.

Ryan Fraser could have doubled their lead shortly after the break but volleyed straight at the keeper while Harry Wilson forced a smart save from De Gea.

It was only in the final minutes when Man United came out of their shells and they could have leveled on 82 minutes when Greenwood got on the end of Fred’s searching cross but the young forward hit the post. Aaron Ramsdale kept out Scott McTominay’s long-range effort moments later.

And Bournemouth held on to claim their first win over Man United since December 2015 – a game where King also scored the winner.