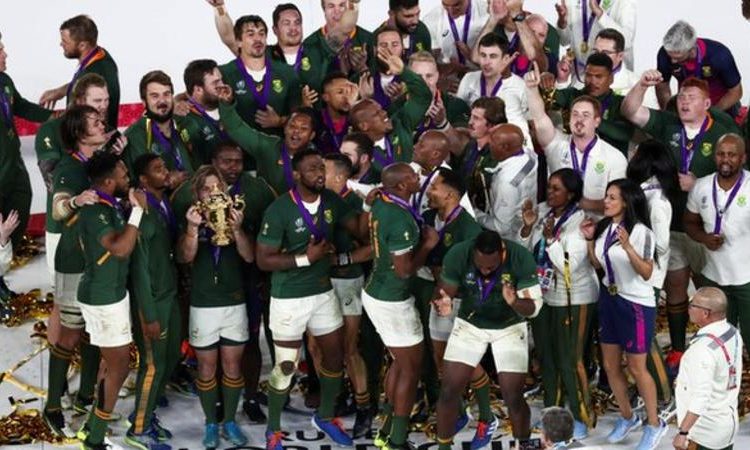 Twenty two points from the boot of nerveless fly-half Handre Pollard and second-half tries from wingers Makazole Mapimpi and Cheslin Kolbe ground England into the Yokohama dirt on a horrible night for Eddie Jones’s men.

England had trailed 12-6 at the interval after taking a hammering in the scrum and making a series of handling errors.

And despite four penalties from captain Owen Farrell they never looked like closing that gap as the Springboks produced an outstanding display to match those of 1995 in Johannesburg and 2007 in Paris.

Those were iconic moments for a nation besotted with rugby and when Siya Kolisi lifted the William Webb Ellis trophy aloft as the first black man to captain the Springboks they will have the final part of a triptych that will endure forever in the country’s collective memory.

For England it was a chastening end to a campaign that had promised to end the 16-year wait for the World Cup glory.

They were out-muscled, out-run and out-thought by a team transformed by the leadership of skipper Kolisi and the coaching of Rassie Erasmus.

Never before has a team beaten in the group stages gone on to win the trophy, but this is a triumph to match that of the teams of Francois Pienaar and John Smit with a wider story that perhaps surpasses both.

England, so quick out of the blocks in their semi-final win over the All Blacks, were rocked in the opening exchanges as prop Kyle Sinckler was knocked out in an accidental collision and forced to leave the field before touching the ball.

South Africa took that momentum and through a Pollard Garryowen-and-gather went deep into the English 22 before Willie le Roux knocked on as he carved an outside line down the right.

England were rattled, throwing loose passes, Farrell isolated as he tried to mop up one from Billy Vunipola and Pollard banging over the resulting penalty for 3-0.

The huge Springbok pack was making a mess of the English scrum and disrupting their line-out, but when the men in white made their first series of forays they won a breakdown penalty and Farrell levelled things up.

Now it was the Springboks forced into changes, hooker Mbongeni Mbonambi off with concussion and lock Lood de Jager appearing to dislocate a shoulder.

Yet England knocked on at the restart, had their scrum splintered and were behind again as Pollard slotted the penalty from the angle.

Back they came. The forwards hammered away at the South African line after driving a line-out on the 22, Courtney Lawes and replacement Dan Cole both going close until Duane Vermeulen infringed and Farrell kicked the penalty for 6-6.

The vast English support in the stands found their voice but the mistakes kept coming.

Billy Vunipola was penalised for holding on and Pollard landed a beauty from 40m, and then Elliot Daly knocked on from Lukhanyo Am’s kick ahead, the scrum was mangled again and Pollard struck again from in front of the posts.

It was a horrible half from Eddie Jones’ men, that 12-6 half-time deficit the biggest they had faced in the entire tournament.

Pollard drilled over a beauty from just over halfway and at 15-6 England were staring into the abyss.

The South African power was stopping their big runners dead and killing England at the breakdown and Jones rolled the dice, throwing Joe Marler into the front row and Henry Slade in at outside centre as Farrell took Ford’s place at fly-half.

It initially appeared to work. England blew the Springbok scrum apart, Farrell lined up the penalty and it was a six-point game.

Now Curry got to work, snaffling a breakdown penalty to give Farrell another shot, this time from 45m out wide, only for the kick to drift just wide of the right-hand post.

What could have been 15-12 was suddenly 18-9 as South Africa set up a maul in midfield and England were caught offside for a penalty that Pollard was never going to miss.

England had 22 minutes to save their World Cup and grabbed a lifeline from Farrell’s fourth penalty after Vermeulen held on from the restart.

Luke Cowan-Dickie and Mark Wilson came on for Jamie George and Sam Underhill but with 14 minutes to go the killer blow came.

South Africa went left down the blindside, Mapimpi kicked on and Am gathered before finding the winger on his outside shoulder for the first try the Springboks had scored in three World Cup finals.

Pollard’s conversion from in front made it 25-12 and the stands were alive with green-shirted noise.

And when the diminutive Kolbe stepped and accelerated through an exhausted rearguard in the final moments the Springboks could kick-start a Japanese party that will sweep through their homeland.