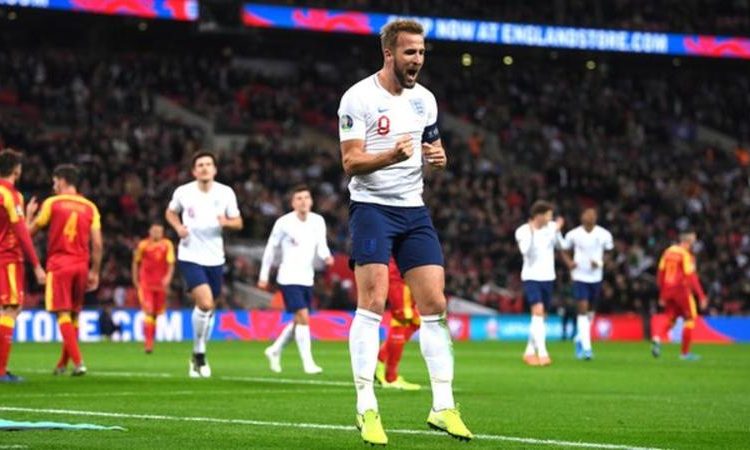 Harry Kane is the first Englishman to score a hat-trick in consecutive games at Wembley (Image credit: Getty Images)

England celebrated their 1,000th game in style as they secured qualification for Euro 2020 and won Group A with an emphatic demolition of Montenegro at Wembley.

Captain Harry Kane moved to sixth in England’s list of leading scorers as a first-half hat-trick took his tally to 31, while Alex Oxlade-Chamberlain opened the scoring on his first start for 18 months and Marcus Rashford was also on the scoresheet in that 45-minute barrage.

As England and the Football Association enjoyed this landmark occasion, with a parade of legends and 1966 World Cup winners in attendance, Montenegro proved the most amenable of opponents, particularly in the opening half when Kane and company ran riot and the visitors’ defending was shambolic.

Oxlade-Chamberlain finished superbly to begin the rout while Kane quickly added two headers, with all three goals created by Leicester City defender Ben Chilwell. England’s captain and Rashford were also the beneficiaries of Montenegro generosity before the interval.

It was also in evidence in the second half when Aleksandar Sofranac diverted Mason Mount’s shot into his own net for England’s sixth.

To complete a perfect night for Gareth Southgate and England- who by qualifying automatically ensured they will play all three Euro 2020 group matches at Wembley – the manager was able to give a debut to Leicester City’s James Maddison, while substitute Tammy Abraham scored his first full international goal.

The introduction of Liverpool’s Joe Gomez appeared to be bizarrely greeted by some jeers from England fans after the clash with Raheem Sterling that saw the Manchester City forward dropped as a disciplinary measure, but otherwise Southgate’s side marked this gala occasion and qualification with a flourish before Sunday’s final game in Kosovo.