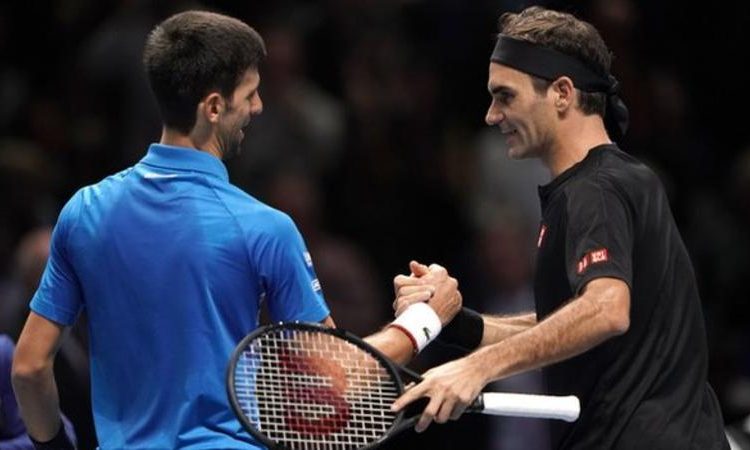 Roger Federer moved into the ATP Finals last four at the expense of Novak Djokovic with a scintillating win over his great rival at the O2 Arena.

Swiss third seed Federer, 38, won 6-4 6-3 in a round-robin match which eliminates the Serb second seed from the season-ending tournament in London.

Djokovic’s defeat also means Spain’s Nadal is guaranteed to finish as the year-end world number one.

Nadal, 33, is far from certain of reaching the last four himself, needing victory over Greek sixth seed Tsitsipas on Friday to have any chance.

However, if German seventh seed Alexander Zverev beats Russian fourth seed Daniil Medvedev then Nadal is out regardless of his result.

If results do go his way then Nadal will top the Andre Agassi Group and face Federer – who has finished second behind Austrian fifth seed Dominic Thiem in the Bjorn Borg Group – in Saturday’s semi-final.

Six-time champion Federer, who lost his opening match to Thiem, jumped for joy after clinching a victory which goes some way to avenging his defeat by Djokovic in an epic Wimbledon final in July.

Asked what he did differently at the O2, Federer said: “I won match point, I guess. It was so close at Wimbledon. It was a privilege to play that match, so many ups and downs.

“I couldn’t be more happy right now. I think I served great, had great anticipation, clear game-plan and it worked great tonight – hopefully not for the last time against Novak.”

Kwesi Appiah "blown away" by Black Stars after SA victory