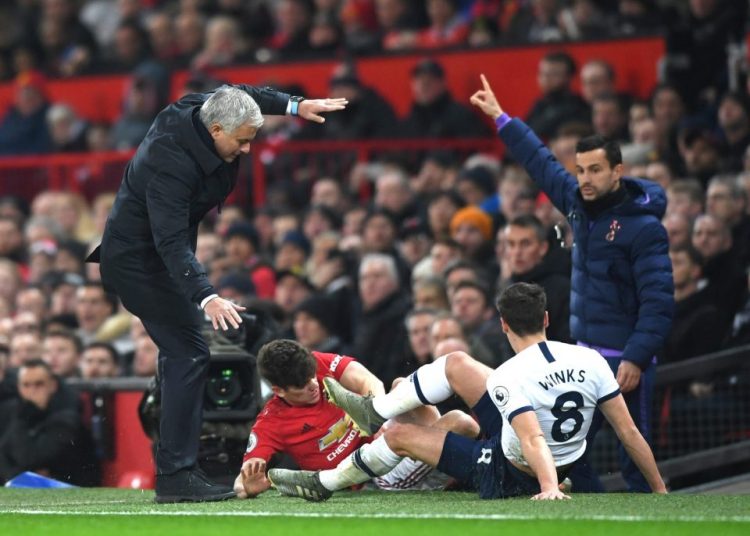 Jose Mourinho’s return to Old Trafford ended in defeat as his Tottenham side were beaten 2-1 by Manchester United.

The Portuguese was at Man United’s home for the first time since he was sacked as Red Devils boss in December 2018.

But his new club were behind on six minutes when Marcus Rashford beat Paulo Gazzaniga at the near post after Jesse Lingard dispossessed Davinson Sanchez in a dangerous area.

A moment of magic from Spurs’ man of the moment Dele Alli leveled the scores just before half time – Alli flicking the ball up before finding the corner of the net on the half-volley.

But the home side restored their lead after the break through a penalty from Rashford after Moussa Sissoko was adjudged to have brought the England striker down, although replays suggest there was minimal contact.

Liverpool piled more misery on Marco Silva as they got the better of Merseyside rivals Everton, winning 5-2 at Anfield.

Goals from Divock Origi and Xherdan Shaqiri put Jurgen Klopp’s men 2-0 up but Michael Keane’s neat finish pulled one back for Everton on 21 minutes.

But an excellent touch and lob from Origi and Sadio Mane’s strike made it 4-1 to the Reds. Richarlison scored on the stroke of half time with a header.

There was only one more goal in the second half and that fell to Liverpool – Georginio Wijnaldum firing the ball home following great work on the left from substitute Roberto Firmino.

Mason Mount’s fierce effort secured the victory for Chelsea though, who had lost their two previous matches.

Below you can see the results from all six Premier League matches on Wednesday night.