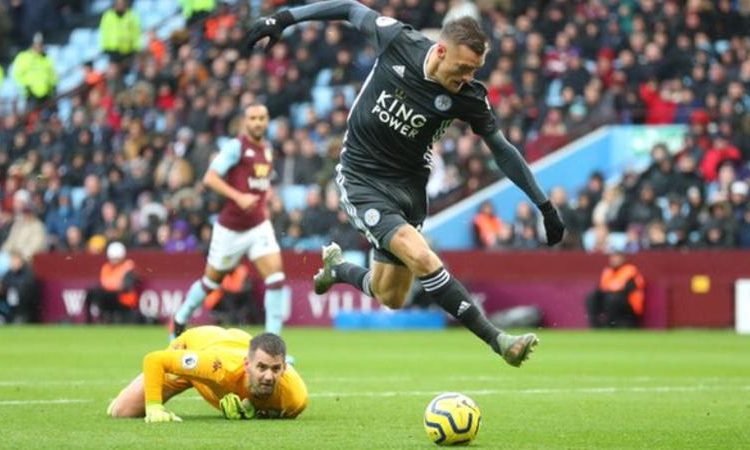 Brendan Rodgers’ side reduced the deficit on top spot to eight points once more with a clinical display at Villa Park, in which former England striker Vardy netted for the eighth successive match.

Vardy linked up with Kelechi Iheanacho to open the scoring after 20 minutes, skipping round Villa keeper Tom Heaton and finishing at the second attempt.

Iheanacho added the Foxes’ second from close range as the visitors looked to have taken control before the break, only for Villa captain Jack Grealish to whip an effort into the bottom corner on the stroke of half-time.

The hosts’ comeback was short lived, however, with Jonny Evans heading in from a corner shortly after the interval.

Vardy then dashed clear with 15 minutes remaining to slide an effort beyond Heaton and put the game out of Villa’s reach.

Leicester remain second in the top flight, but now have a six-point advantage over Manchester City after Pep Guardiola’s side were beaten by Manchester United on Saturday.

Foxes make it eight on the bounce

The last time Leicester City visited Villa Park they were en route to the most remarkable of Premier League triumphs, while the hosts were heading towards the Championship.

Four seasons on and, while no bookmaker will give you odds of 5,000-1, a repeat of those league-winning heroics would seem almost as unlikely, despite their lofty position.

Liverpool’s dominance means any talk of Leicester’s name being etched on the trophy again has been little more than a whisper, but is it time to start shouting about the Foxes’ chances?

This victory means Rodgers’ side have now won more top-flight games in a row than at any time in their history and have more points at this stage of the season than when Leicester won the league.

In fact, in 15 of the past 27 Premier League seasons they would be sitting top of the table after 16 games with such a tally.

Rodgers, who signed a new contract this week, is leading a side in ruthless form.

Vardy pounced for his first after a neat ball from Iheanacho, making the most of the space left behind by a limping Tyrone Mings to open the scoring – after which the Villa defender was immediately replaced.

He might have had another moments later after another neat Iheanacho pass, but instead it was the Nigerian who bundled home from close range to double the Foxes’ lead.

Leicester seem to have a knack of scoring in timely fashion this season, too.

Evans’ header from a deep Maddison corner stemmed Villa’s fightback after Grealish had struck before the break and Vardy’s second from Dennis Praet’s assist ensured a club record-breaking eighth successive win in the top flight.

Many might be writing them off but no-one has told Leicester, who face their title rivals as part of a packed Christmas schedule.