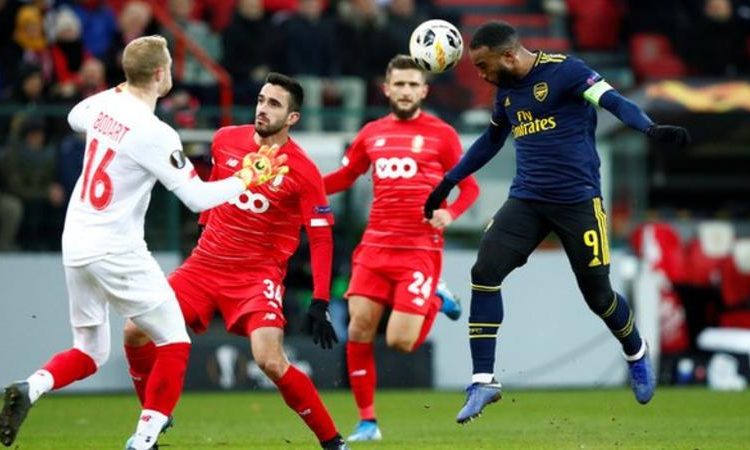 Lacazette's goal was his sixth of the season (Image credit: Reuters)

Arsenal came back from two goals down to draw 2-2 at Standard Liege and progress to the last 32 of the Europa League as group winners.

The Gunners were all but through before kick-off, with the hosts needing to win 5-0 to prevent the visitors from going through to the knockout rounds – a result that looked even more unlikely after a first half Arsenal edged.

However, Samuel Bastien put the hosts ahead just after the restart when his shot deflected off Sokratis and beyond the wrong-footed Emiliano Martinez.

The goal boosted the hosts but visibly knocked the fragile confidence of the Arsenal players, who became even more nervy when Standard Liege got a second as Selim Amallah’s strike from inside the area flew into the far corner via a slight deflection off Konstantinos Mavropanos.

It set things up for a tense final 20 minutes as the hosts pursued an unlikely result but Alexandre Lacazette settled the Gunners’ nerves when he converted a bullet of a header.

Bukayo Saka then equalised with 10 minutes to go, curling a neat finish into the corner to secure the draw Arsenal needed to top Group F.

It was perhaps a bit too much to expect Monday’s morale-boosting win at West Ham to mark an immediate upturn in Arsenal’s performances, particularly after a torrid run of nine games without victory.

As was the case in London, the Gunners were below par for over an hour of this encounter and paid the price for poor defending – an area of concern for much of this season – when no players took responsibility to close down Standard Liege’s players, allowing the goalscorers to get off shots that were easily preventable.

But it took going behind to spark Arsenal into life and, after weathering pressure from the hosts, a devastating three-minute spell killed off Standard Liege’s hopes of an upset.

There were glimpses of what Arsenal are capable of but the fact it took falling behind for that show is something Freddie Ljungberg or a new manager will need to address quickly to prompt a more consistent run of form.