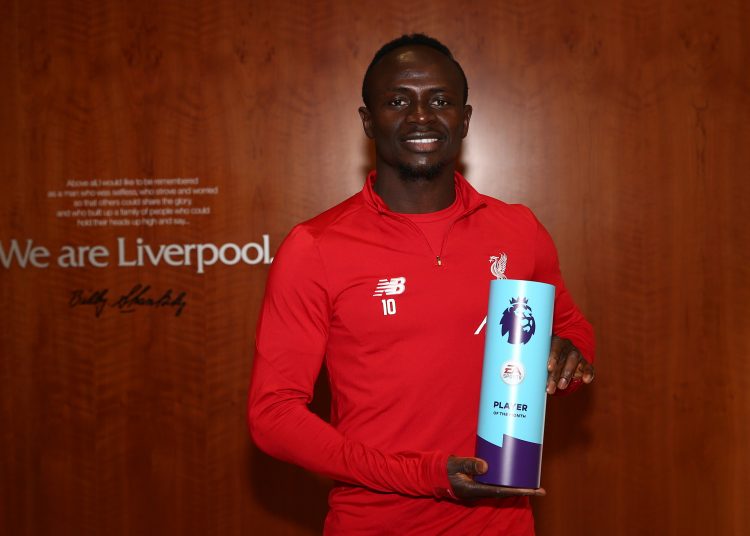 Sadio Mane has won the EA SPORTS Player of the Month award for November.

Mane’s three goals and one assist helped Liverpool win all four matches to go eight points clear at the top of the table.

The Senegalese started the month with an inspirational performance at Aston Villa, setting up Andrew Robertson’s 87th-minute equalizer before heading in the winner in stoppage time.

He then scored against champions Manchester City and at Crystal Palace.

Winning for the third time

It is the third time the 27-year-old has won the award, adding to his triumphs from August 2017 and March of this year.

Premier League fans selected their favourite on the EA SPORTS website. The votes of the public were then combined with those of the 20 club captains plus a panel of football experts.

Klopp named manager of the month

Jurgen Klopp has been named the Barclays Manager of the Month.

Klopp claims November’s prize after guiding the leaders eight points clear at the top of the Premier League table with four victories from as many matches.

He is only the second manager in history to pick up the award in three of the first four months of a top-flight campaign, after Pep Guardiola in 2017/18.

“It feels really good,” Klopp said. “But I don’t take it personally. My players are responsible for that, obviously, because they have so far played an outstanding season.”

Liverpool’s flawless November included a 3-1 success against Manchester City, while the Reds also beat Aston Villa, Crystal Palace, and Brighton & Hove Albion, and Klopp is targeting a fourth Barclays award of the season with an impressive December.

Klopp said: “If I get it next month that would mean we have a pretty good December, which is a pretty busy one, so that is my target actually!”

Overall it is the sixth time the German has won the award, which was decided after votes from the public were combined with those of a panel of football experts.

Nathan Holland has won the Premier League 2 Player of the Month award for November.

Holland played a starring role as West Ham United extended their unbeaten start to the PL2 season to stay top of Division 2.

The 21-year-old winger was directly involved in five goals as the Hammers won 4-2 at Swansea City and beat Aston Villa 4-0.

And his three goals and two assists caught the eye of first-team manager Manuel Pellegrini, who handed Holland his Premier League debut at Wolverhampton Wanderers in Matchweek 16.

“You have to work hard and I’m doing that,” Holland, who also featured as a substitute against Arsenal on Monday, told West Ham’s official website.

“I think that’s the reason I’m doing so well.

“I just love being on the pitch, playing games, there’s no better feeling. Especially coming on in the Premier League, it’s a different level. It’s amazing.”

The Englishman, who joined West Ham from Everton in 2017, was named PL2 Player of the Month by the Premier League’s Football Development Panel.