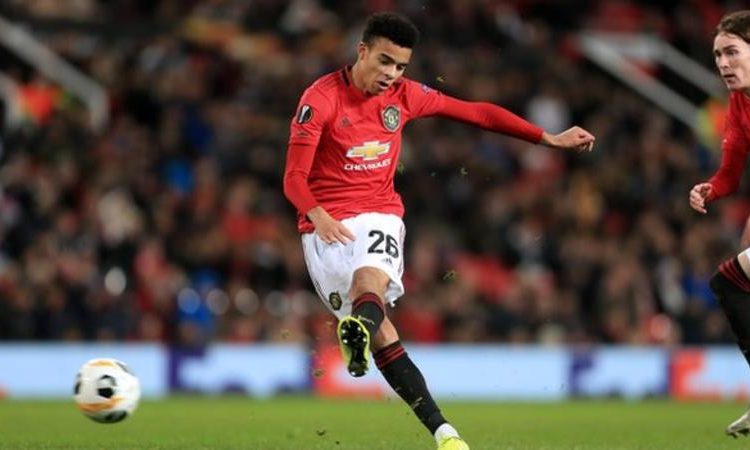 Mason Greenwood is the youngest player to score twice in the same game in Europe for Manchester United, aged 18 years and 72 days (Image credit: Getty Images)

Mason Greenwood scored twice as Manchester United got four in 11 minutes to defeat AZ Alkmaar and secure a seeding for the Europa League knockout phase.

After a mundane first half, the game burst into life in the 53rd minute when Ashley Young drove home Juan Mata’s cross for his first goal since February.

Greenwood stole the headlines though, firing home from the edge of the box before producing a fine left-footed finish to end the scoring frenzy.

It was the first time the 18-year-old had scored two in a first-team game and took his overall tally for the season to six. He is now United’s leading scorer in Europe this season and only Marcus Rashford has scored more in all competitions.

In between the striker’s double, Mata converted a penalty for the Spain midfielder’s first goal of the season.

The victory was United’s biggest in Europe since 2016 when they beat another Dutch side, Feyenoord, by the same score and means they will avoid Benfica, Ajax and Inter Milan in Monday’s last-32 draw.

The victory was United’s third in a row in all competitions, coming after impressive triumphs against Tottenham and Manchester City.

It is only the third time United have done that since Ole Gunnar Solskjaer began his spell as United manager with eight successive wins after he replaced Jose Mourinho on 19 December last year.

The opening period lacked a competitive edge but Solskjaer will be delighted at the way it turned out, particularly as, from the team that started against Manchester City, only Harry Maguire and Martial kept their places.

This is crucial as, with a Carabao Cup quarter-final against Colchester in which they are overwhelming favourites, Solskjaer’s side were starting what could turn out to be 19 games in 77 days, which will end with the second leg of their Europa League last-32 tie.

The volume of fixtures is one of the reasons why it is still felt United need to make signings when the transfer window opens next month.