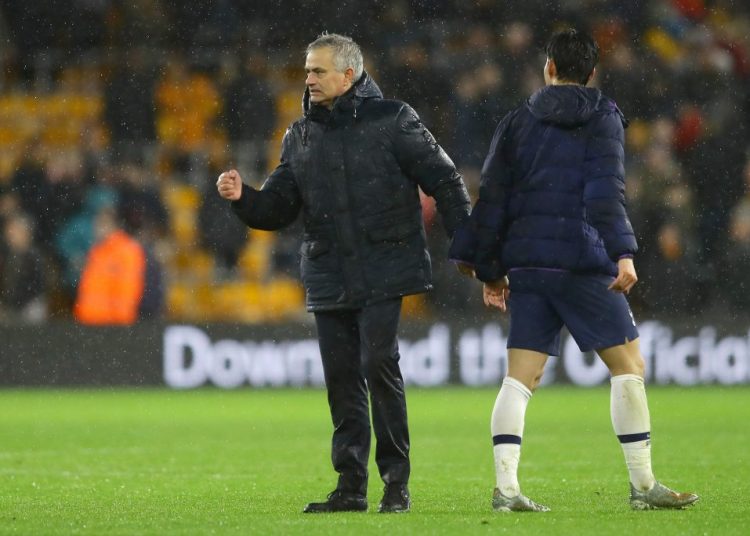 The match looked to be heading for a draw after Adama Traore’s thunderbolt canceled out Lucas Moura’s stunning solo effort.

And, if anything, the hosts looked the more likely in a thrilling final 20 minutes.

But Vertonghen’s perfectly-placed header in the first minute of stoppage time ensured Spurs closed the gap on fourth-placed Chelsea to three points.

It puts Jose Mourinho’s men within striking distance when they welcome the Blues to the Tottenham Hotspur Stadium next weekend.

Wolves drop to eighth and their unbeaten run, their longest in the top flight since 1962, ends after 11 games – although they have still lost just twice in their last 19 outings in all competitions.

The hosts made an industrious start but it was Spurs who scored after eight minutes.

Son Heung-min’s drive was beaten away by Rui Patricio but the ball was worked to Moura on the right and he slipped past flimsy challenges from Jonny and Romain Saiss.

The forward glided into the area before rifling in high from an angle for his third goal in seven games under Mourinho.

Traore had given the visitors problems all game and he made them pay in the 67th minute, collecting Jimenez’s pass and unleashing a rocket that flew past Gazzaniga from 20 yards.

But Spurs silenced the hosts in the first minute of injury time when Vertonghen nodded in Christian Eriksen’s corner.

Teenager Mason Greenwood came off the bench to salvage a point for an underwhelming Manchester United as they drew 1-1 with Everton at Old Trafford.

Sunday’s encounter was the 4,000th consecutive match in which the club had included a youth graduate in the matchday squad – an occasion that did not go to plan following back-to-back Premier League wins against Tottenham and Manchester City.

Victor Lindelof’s own goal had much-loved caretaker manager Duncan Ferguson bouncing on the touchline in celebration, but homegrown teenager Greenwood came off the bench to deny Everton a first Old Trafford win since 2013 as it ended 1-1.

It was a frustrating afternoon just as Ole Gunnar Solskjaer’s side appeared to have turned the corner, yet it would have been a lot worse was it not for Greenwood, Thursday’s man-of-the-match against AZ Alkmaar.

Injury-hit Everton played with confidence following the impressive win against Chelsea and was on course for another shock triumph when Lindelof turned into his own goal and the video assistant referee cleared Dominic Calvert-Lewin’s challenge on David De Gea.

In another talking point, Everton boss Ferguson bizarrely decided to bring off Moise Kean, despite introducing the club’s summer signing just 18 minutes before.

It extended United’s wait for a Premier League clean sheet to an 11th match and left them with a mountain to climb, leading Solskjaer to turn to the club’s latest academy star.

Greenwood has impressed whenever given the opportunity this season and did not disappoint when brought on in the second half, with the 18-year-old finding space to get away a low shot and secure a point.