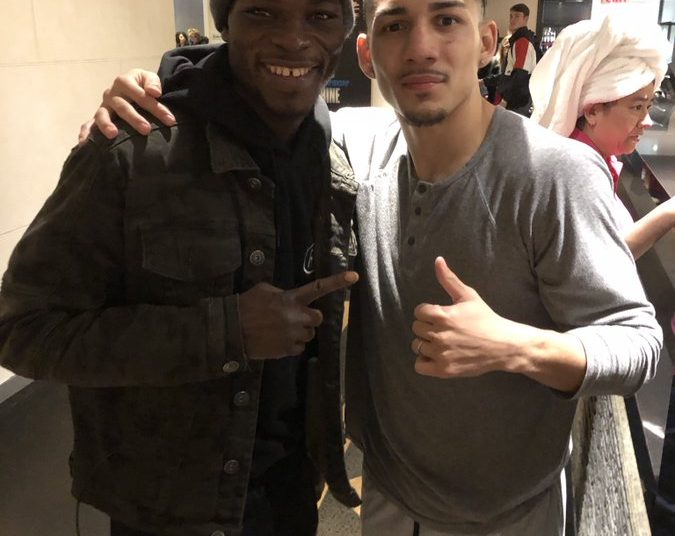 New IBF Lightweight champion, Teofimo Lopez, may have viciously knocked out Richard Commey to take the Ghanaian’s belt but there was no animosity or bad blood between the two boxers.

They clashed in New York on Saturday night (Sunday morning in Accra) for the title and more importantly, the chance to face Vasyl Lomachenko the chance to unify all the belts in the division in 2020.

Lopez emerged the winner with a very powerful performance and a knockout to boot to become the new IBF champion but two boxers did not choose to go down the path of bitterness.

Rather, there was a lot of love and respect and after the bout, the two gentlemen paid each other compliments and showed great sportsmanship on social media.

Richard Commey shared a picture of himself and Lopez after the bout and added a caption that read:

“Congratulations to the new ⁦@IBFUSBAboxing⁩ lightweight champion of the world ⁦@TeofimoLopez⁩, a great achievement at such a young age, I wish you all the best in the future and may God bless you and your family.”

Lopez responded to the tweet with some kind words of his own and went on to describe Commey as an inspiration to himself and other boxers.

A true champion not only to his people in Ghana but to everyone all around the world. Thank you for being such an inspiration for all us young fighters.
@RichardCommey

The messages between the two boxers will not too much of a surprise for fans because before the bout, they expressed their respect and admiration for each other.
Lopez was especially more open about how much he rated Commey and that their meeting was solely down to the exigencies of the sport and the intersection of their respective personal ambitions.
Share407TweetSend
Previous Post