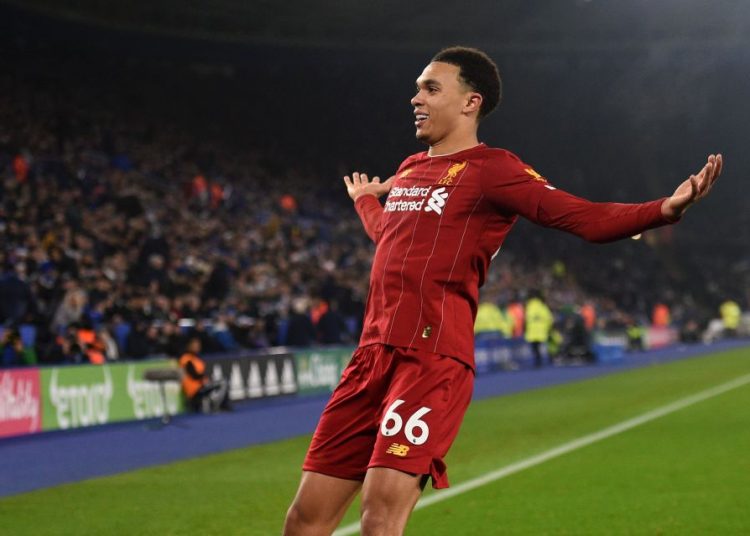 Liverpool sent out a hugely emphatic message to anyone who believes the Premier League title race is still alive as they tore second-placed Leicester apart on their own back yard, winning 4-0 at the King Power Stadium.

Two goals from Roberto Firmino, a James Milner’s penalty, and a delicious Trent Alexander-Arnold strike sees the Reds go 13 points clear at the top of the table.

The visitors could have scored more as they lacked composure in the final third for large parts of the game.

Before three strikes in three second-half minutes produced a scoreline that fairly reflected the balance of play.

The game’s standout player was Reds right-back Alexander-Arnold, who played a major role in all four Liverpool goals.

The Reds could have been a bit rusty as they’ve just come back from their Club World Cup success 3,000 miles away in Qatar. Not this team though.

They produced their most complete performance of the season so far, dominating the talented Foxes side from start to finish.

It’s no exaggeration that Leicester could have been 3-0 down inside the first ten minutes – Alexander-Arnold firing a swerving shot straight at Kasper Schmeichel after 36 seconds, while Mohamed Salah was wasteful in front of the goal twice.

Leicester could not deal with Liverpool’s high press and nearly gave away the lead on 14 minutes when Firmino’s tackle on Wilfred Ndidi fell to Henderson and the midfielder’s effort deflected just wide.

But Liverpool’s pressure told just after the half-hour mark when Firmino nodded them in front. The Brazilian got on the end of Alexander-Arnold’s pinpoint cross after Leicester failed to properly clear a corner.

Sadio Mane should have doubled their lead when he found himself through but Schmeichel did well to make himself big and keep the ball out.

After the break, Liverpool continued to dominate and Firmino should have got his second but failed to connect with Andy Robertson’s cross.

This seemed to encourage Leicester a bit but just when they started to get some joy, ruthless Liverpool took the game away from them.

And Liverpool doubled their lead when Alexander-Arnold’s corner struck Caglar Soyuncu’s hand. Substitute Milner stuck the ball in the net from 12 yards with his first touch of the game.

That truly knocked the stuffing out of Leicester and Firmino did get his second goal on 74 minutes with a cool finish, Alexander-Arnold providing the assist with a menacing low ball from the right.

Alexander-Arnold then got the goal his stellar performance deserved, firing Sadio Mane’s lay-off with a beautiful daisy-cutter and round up a brilliant night’s work.