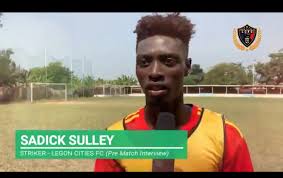 Legon Cities FC striker, Sadick Sule, has laid down a strong warning to Asante Kotoko ahead of their Week 2 Ghana Premier League clash on Friday at the Accra Sports Stadium.

Sule has boldly declared that he will score two goals against the Porcupine Warriors in the first meeting of the two teams this season.

Sule and his team grabbed a 2-2 draw against Liberty Professionals in Dansoman in the opening round of the league season and Sule is hoping that they will get their first victory of the season and that feat will be powered by two goals from him.

“I am very confident and on Friday I will score two goals against Kotoko God willing. It is something I have planned to do I believe we will take the 3 points.

Going up against Kotoko is no big deal for us because we are footballers just like that are. We are well prepared to take all the points at the Accra Sports Stadium so we are not worried at all. We know who they are but we also believe in our capabilities.”

The match is the first non-weekend league game of the season and it is the first of three matches at the Accra Sports Stadium in Week 2 with the other two being Inter Allies vs Bechem United on Saturday and Great Olympics vs Aduana Stars on Sunday.

Legon Cities FC lie 10th on the league table with a point while Kotoko are  6th with 3 points.