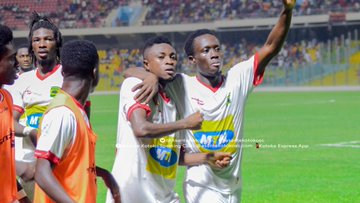 Accra Hearts of Oak and Great Olympics are joint bottom of the  Ghana Premier League after two rounds after they both suffered their second respective losses of the season.

Hearts were beaten 3-0 at Medeama with goals coming from Prince Opoku Agyemang and Nana Kofi Babil  while Olympics fell to a 1-0 defeat at home to Aduana Stars with the winning goal from Nathan Kwasi Richard in the 92nd minute.

AshGold travelled to Techiman and got themselves a 1-0 win against Eleven Wonders with Yousif Mubarik scoring the winner.

Asante Kotoko came back from a goal down to beat Legon Cities FC 3-1 at the Accra Sports Stadium on Friday.

Kwabena Kyeremateng scored for Bechem while Victorien Adebayor and Salifu Moro got the goals for Inter Allies.

WAFA proved strong at home and got past Ebusua Dwarfs 2-0 with Eric Asumani and Daniel Owusu getting the goals.

The only blank game of the round happened in Berekum where Chelsea and Liberty Professionals faced off.

The league table has Medeama, Aduana Stars, Dreams FC, AshGold and Kotoko leading the pack on 6 points from their first two matches.

In all 17 goals were scored in the second round of the league.