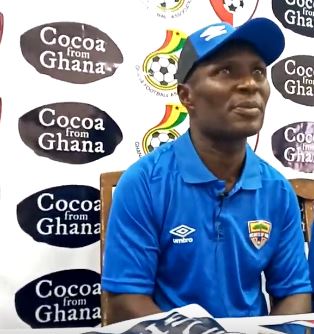 Ahead of the Super 2 clash with rivals, Asante Kotoko, on Sunday, Hearts of Oak interim head coach, Edward Odoom, has clearly stated that his side is aiming for a victory and all the points available on the day.

Hearts are heading into the match in some good form as they are unbeaten in their last three league matches.

They got themselves a 2-1 win over Dwarfs in Week 3, a goalless draw with WAFA in Week 4 and a late turnaround 2-1 win at Liberty Professionals in Week 5 to give them 7 points on the table.

Odoom says they are aiming to take their tally to 10 when they face Kotoko in Accra on Sunday.

“This is a league match and there are three points at stake. Those are important points we want to pick up on Sunday and we want nothing else.”

Odoom had a word of praise for the team’s fans who kept faith even after losing their first two league matches of the season.

He said that the fans had given the players the needed push to persevere and keep going and that had played its part in fueling the turnaround at the club.

“With the support of the fans, the players have been motivated to play very well. In Dansoman (against Liberty) and in Sogakope (against WAFA), the fans were marvelous and that helped the players.”

Hearts will be seeking revenge for their two most recent losses to Kotoko.

Kotoko edged the Phobians 2-1 in Kumasi on December 22 in the President’s Cup while the Reds also won the NC Special Competition semi-finals on penalties in June 2019.