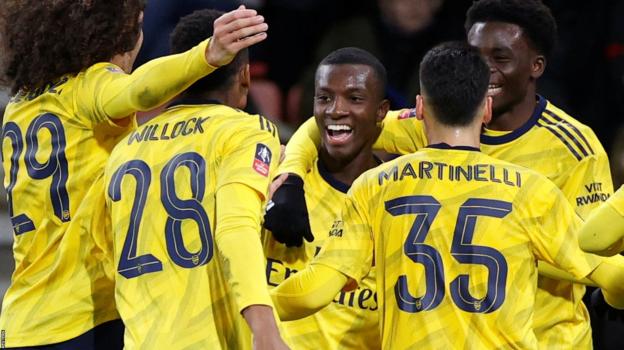 Mikel Arteta’s side were good value for their victory, the platform for progress into the next round built on first-half goals from Bukayo Saka and Eddie Nketiah.

Bournemouth substitute Sam Surridge pulled a goal back deep into eight minutes of stoppage to give the scoreline a look of respectability and give Arsenal some late anxious moments, but in reality the Gunners were by far the superior team.

“I’m very pleased. I knew it was going to be a tough game and we played a really young squad,” said Arteta. “I wanted to see the reaction and I was very pleased because I saw a lot of things I really liked.

“In the first half we were really, really good. They executed everything we planned in a really good way and showed he courage to make big decisions.

“We played with that accountability, making decisions and I really liked it. They were terrific with their work-rate, showed courage to make those big decisions and not to play safe.

“That is the difference.”

Eighteen-year-old Saka lashed a finish past Bournemouth keeper Mark Travers after only five minutes following good work from the outstanding Joe Willock and Gabriel Martinelli, the goalscorer then turning provider to set up Nketiah for a simple finish in the 26th minute.

Arteta gave particular praise to Nketiah, whose season-long loan move to Leeds was cut short at the start of this month over concerns the 20-year-old was not getting enough first-team action.

“Eddie Nketiah was terrific,” said Arteta. “He was on the wing then three seconds later he was in the middle and scoring a goal. This shows me he will score goals and the way he worked without the ball was excellent.”

The only blot on Arsenal’s night was a second-half ankle injury that saw defender Shkodran Mustafi taken off on a stretcher.