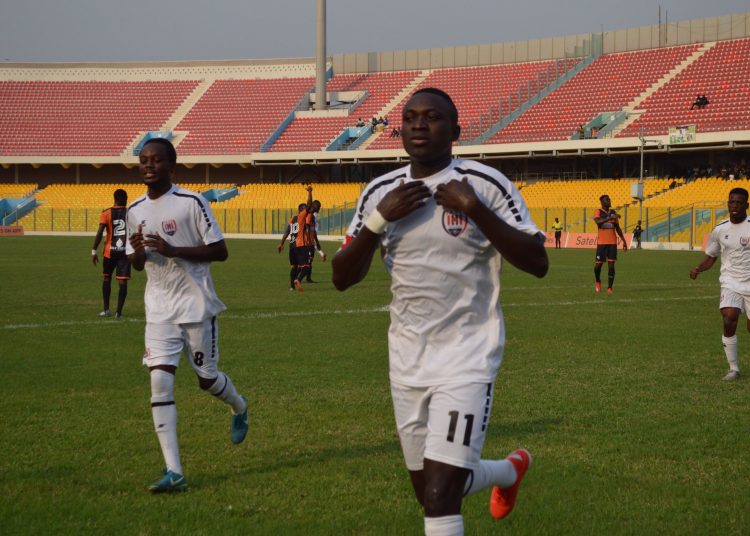 With eleven goals so far in the Ghana Premier League, Nigerien international and Inter Allies’ striker, Victorien Zakari Adebayor leads the pack of the top flight’s most prolific scorers this season.

The all-new Ghana Premier League is just eleven match weeks in, but Adebayor is proving unstoppable for defenders. with many coaches probably dreading facing him in this season.

Inter Allies are just 11th on the league log but the impact of Victorien Adebayor has been significant to keeping his side out of the relegation zone.

Under the guidance of Tony Lokko, the 23-year-old has evolved to become one of the league’s best strikers.

The skipper of Inter Allies is out in front of a chasing pack that includes Mohammed Yahaya of Aduana Stars, Prince Opoku Agyemang who plays for Medeama and Prince Kwabena Adu of Bechem United.

With all the buzz around the star striker, here are five facts you need to know about him:

Age and date of birth

Nationality and international matches for the country

He is a Nigerien international. Victorien Zakari Adebayor was born and grew up in Niger and started his playing career in his native country.

He has already featured 27 times for the senior football national team of Niger and has 9 goals to his name, since making his debut in 2015.

Adebayor Victorien started his playing career at Atcha Académie Niamey in 2014 before moving to AS Douanes.

He got a free transfer to the French side Union Sportive Raonnaise. He was soon back in his native land and signed for Association Sportive des Gendarmerie Nationale Nigérienne, who are often referred to as AS GNN.

In 2017, after the West African Football Union (WAFU) Cup of Nations in Ghana, the 23-year-old was scouted and signed by Ghanaian club, Inter Allies after the striker dazzled many in the tournament. He ended the tournament – having scored three goals – as joint top scorer with Stephen Sarfo of Ghana.

On March 17, 2018, at the Tema Sports Stadium, the 23-year-old made his debut for Inter Allies in a league clash against Bechem United.

Two goals and a man of the match award was how the Nigerien international announced his arrival in Ghana’s top flight.

The dribbling expert grabbed five more goals and ended up with 7 goals in 12 games in his season for Inter Allies, a mark that proved that would only score more over time.

The key architect to the survival of Inter Allies so far this season has dazzled many fans since his debut in the Ghana Premier League two years ago.

Pick, run, control, dribble, and strike, all characteristics of the 23-year-old striker.

In the 10th week of the Ghana Premier League, the Nigerien went viral on social for his spectacular performance against Berekum Chelsea where he hit a brace.

Both of his goals went viral for different reasons – the first was a seemingly straightforward freekick that went through the keeper’s legs while the second was a fantastic finish.

However, it was a particularly brilliant piece of skill that was pushed aside as ‘the other highlight’ from a stellar game for the Nigerien international.

Picking the ball out on the wing, Adebayor juggled the ball for a bit baiting the Chelsea defender into acting.

When the defender did, Adebayor calmly slipped it between his legs.

His second goal was a brilliant solo run, in which he interchanged passes before running down the line, cutting back and curling the ball over the goalkeeper of Berekem Chelsea who could only admire the ball hitting the top corner of his net from the sumptuous strike.