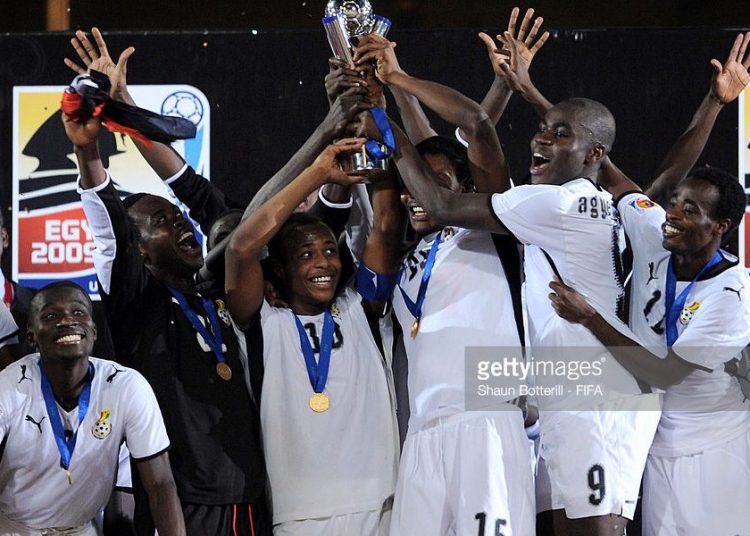 Freelance football writer, Scott Geelan, takes a tactical dive into Ghana’s tactics in the final of the 2009 FIFA U-20 World Cup between the Black Satellites of Ghana and Brazil.

On the 16th October 2009, the Black Satellites of Ghana became the first African side to win the FIFA U20 World Cup, defeating Brazil on penalties after an unyielding performance in the final.

Having proven themselves to be an attacking threat throughout the tournament, the young Ghanaians showed another side to their game, offering tenacious resistance for over 80 minutes after Daniel Addo’s 37th minute sending off.

This analysis will investigate Ghana’s tactical approach to the final.

To appreciate Ghana’s approach, Brazil’s lineup and tactics must first be understood. The Brazilians lined up in a 4–2–3–1 formation. Souza and Renan were an unambitious double pivot, mainly responsible for screening the defence. Douglas (and after 41 minutes, Wellington Júnior) and Diogo Silvestre were tasked with providing width from full-back. Brazil’s creative hub was the trio of Alex Teixeira, captain Giuliano and Ganso. Alan Kardec played ahead of them as a number 9. Teixeria, Giuliano and Ganso all preferred to move centrally, which caused their side to suffer from a real lack of width in the final third.

Ghana utilised a 4–1–3–2 formation in the final. This was incredibly similar to the pragmatic shape that saw England lift the World Cup in 1966, albeit with a different style of player at certain positions. Initially contrived as a counter to the attacking formations of the day whilst enabling central dominance, the modern 4–1–3–2 had similar benefits.

Daniel Agyei was in goal. Jonathan Mensah and Daniel Addo were at centre-back with Samuel Inkoom and David Addy at full-back. Emmanuel Agyemang-Badu was the defensive midfielder, playing behind a trio of captain Andre Ayew, Mohammed Rabiu and Abeiku Quansah. Golden Boot winner Dominic Adiyiah played with Ransford Osei up front.

Ghana coach Sellas Tetteh made it his mission to cut off the supply to Brazil’s narrowly-positioned creators. His 4–1–3–2 shape was perfect for this. It was initially developed (in the 1960s) in part to limit the threat of the opponent’s most dangerous attacker, who was often used in the hole to link midfield and attack. Players such as Pelé, Eusébio and Nandór Hidegkuti became superstars in that role. The holding midfielder had the specific responsibility to restrict this player.

Meanwhile, the potential overloads the 4–1–3–2 provided slightly higher up in midfield had both attacking and defensive benefits. The opponent’s central ball progression was inhibited whilst there was often a spare man centrally in attack.

Though Ghana’s defensive shape was extremely narrow, Brazil’s full-backs were not of the requisite quality to exploit this, something Tetteh likely gambled on.

Emmanuel Agyemang-Badu played the key defensive midfielder role. He had to limit the impact of Giuliano. Meanwhile, the players ahead of him, Andre Ayew, Mohammed Rabiu, Abeiku Quansah and Dominic Adiyiah, restricted the ability of the opponents to find angles to play penetrative passes from deep.

In the above image, we see Ghana’s 4–1–3–2 mid-block in action. Whilst more zone than man-orientated, it certainly had an element of man-orientation. Rabiu has access to one member of Brazil’s double pivot. Adiyiah was asked by Tetteh to aid his midfielders, and he too helped to hassle Brazil’s double pivot. Badu has access to Giuliano in the hole. Ghana’s full-backs were asked to stick tight to Brazil’s wide midfielders.

When Giuliano attempted to drop even deeper to avoid Badu’s attention (below), the then-Udinese man followed him, creating a true 4–4–2 shape in defence for Ghana.

As a result, Brazil really struggled to progress the ball effectively from deep areas. Their positioning was often sub-optimal, which certainly did not help, but the Ghanaians were able to force them to play hopeful long balls towards their strikers. This favoured Ghana’s aerial prowess at the back.

When Brazil were able to establish possession in Ghana’s half, Ghana were able to see them off. They retained a very compact 4–1–3–2 shape, forcing the likes of Ganso into wide areas where they were less effective. With Brazil’s double pivot being unambitious passers, Ghana were able to force their opponents to attempt crosses to create chances; a low percentage approach.

Before the red card, though Brazil saw a lot of the ball, the Ghanaians were able to keep their opponents at arm’s length. Meanwhile, they were starting to grow into the game as an offensive threat.

Offensively Ghana sought to counter-attack and create chances via their own full-backs. Additionally, they had opportunities to attack centrally due to the overloads they created.

With Badu at the base of midfield, Quansah, Rabiu and Ayew were tasked with pushing higher and narrower, with the full-backs providing width. Quansah and particularly Ayew showed their quality on the ball. Adiyiah also operated as more of a second striker, dropping off the front line. This had the effect of creating a 4 vs 2 overload against Brazil’s double pivot and overall a 7 vs 5 in midfield.

As Ghana grew into the game, these overloads and the fluidity of Rabiu, Quansah, Ayew and Adiyiah were creating some threatening attacking moments. This was especially the case when Ayew and Quansah swapped sides. Poor execution often let the Black Satellites down however.

Nevertheless, you wonder if Ghana’s direct style and wing-orientated chance creation prevented them from exploiting these overloads a little more. Tetteh asked his full-backs to assist Badu in penetration whilst also asking them to deliver crosses into the penalty area on a regular basis. Could the Black Satellites have played a more centrally-orientated game?

Above, Rabiu and Adiyiah have significant space with the Seleção’s double pivot stretched. The ball is at Inkoom’s feet and he attempts to play a difficult, lofted ball into Adiyiah’s path. Brazil are able to win possession back.

Ghana’s plans after the red card

When Addo was harshly sent off, Tetteh had to tweak his team. Badu moved back to centre-back, with Rabiu playing as the defensive midfielder. Ayew tucked into central midfield and Adiyiah played off the left side. Ghana now used a 4–1–3–1 formation.

Rabiu would continue where Badu left off, attempting to limit Giuliano, whilst Ayew played Rabiu’s initial role as the more attacking centre midfielder. Ghana became more defensive as the match wore on, with left-back Ghandy Khassenu being brought on to play left midfield, whilst Bright Addae would later replace Rabiu. Addae moved to centre-back with Badu once again in the defensive midfield role.

Despite being a man down, Ghana held firm. Though their attacking threat was mostly extinguished with the exception of a few counter-attacks, their defensive resilience and organisation were impressive. They continued to force Brazil’s creators into unfamiliar parts of the field and into long shots and crosses with their compact block.

Quansah had some particularly impressive moments defensively. He worked hard to prevent Brazil from overloading Ghana centrally as his teammates tired and also helped Inkoom once Brazil made changes to attack the wide areas. Below, he runs back from an attacking move to prevent Brazil exploiting a central overload, allowing Badu to recover the ball after a poor touch from Teixeira.

Furthermore, Ghana adapted well to Brazil attempting to isolate their striker, Kadlec, on makeshift centreback Badu. Mensah, who was a rock all game, increasingly man-marked the striker, allowing Badu to be the free man.

Brazil’s coach attempted to change things, bringing on Maicon and Douglas Costa to over width and pace. He also moved Giuliano deeper. Whilst this made the Brazilians more wing-orientated in attack, the Ghanaians responded effectively. When Brazil attacked down the wings, Ghana moved to more of a true 4–4–2 formation, with the wide midfielders helping the full-backs. This created a 6 man defence at times.

We will never know if the Ghanaians could have capitalized on their growing offensive assertiveness in this clash, due to Addo’s red card. However, there can be little doubt that Tetteh’s defensive approach before and after the red card was extremely successful. Brazil’s creators were shut out of the game and forced into wide and deep areas.

Once Brazil belatedly switched to a more wing-orientated attack, the Black Satellites adjusted themselves. Their defensive organistion and prowess prevented Brazil making a breakthrough as the Ghanaians took the game to penalties. From there, they won the penalty kick lottery and wrote their name into history, as Africa’s first U20 World Cup winners.