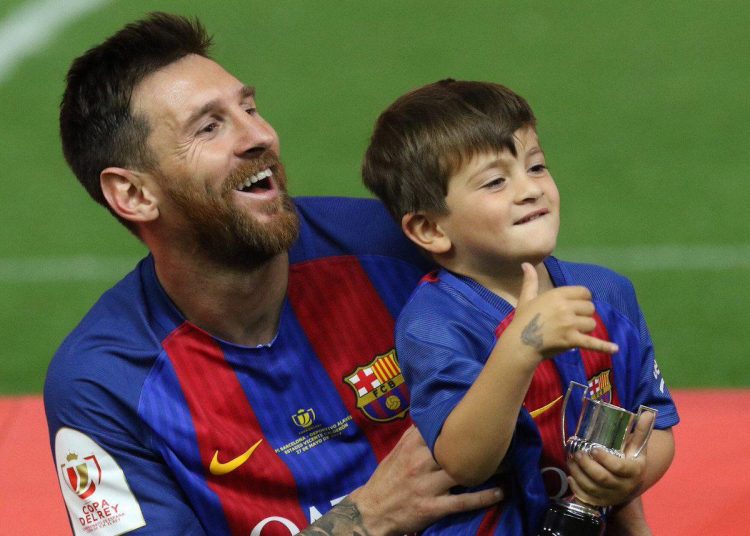 Lionel and his son Thiago

Despite the constant friction between fans of Lionel Messi and Cristiano Ronaldo, it appears that the Argentine’s son isn’t letting the on-the-pitch rivalry between the pair affect his admiration for the Juventus forward.

Messi himself has admitted that Thiago is a big fan of Ronaldo and constantly asks questions about him.

PSG forward, Kylian Mbappe and Brazil’s Neymar are two other players the seven-year-old loves hearing about, according to Messi.

“He talks a lot about Luis [Suarez], with whom we have the best relationship, about [Antoine] Griezmann and Arturo [Vidal] since the first day because of his hair and all that,” he said.

“Also about people from outside, [Kylian] Mbappe, Cristiano [Ronaldo], Neymar. Yeah, Thiago knows them all, he asks questions and likes it a lot.”

Messi added that Thiago and his brother Mateo have developed a love for the game and usually go and watch Barcelona’s training sessions.

“The two older ones are showing more dedication to the ball Thiago and Mateo are the ones that understand the most. They come to the pitch and training sessions and are usually close to me.”

With football on hiatus in Spain due to the coronavirus outbreak, Messi has been spending a lot more quality time at home with his family.

Even two-year-old Ciro joins his father during his workout sessions.