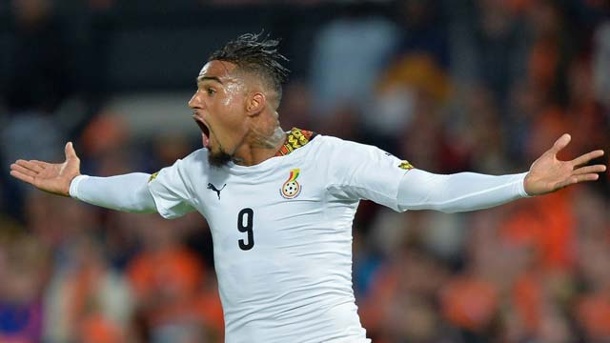 Head coach of the Black Stars, Charles Akonnor, has hinted that he will give a call-up to Kevin-Prince Boateng if things are settled regarding the players’ tussle with the FA.

Boateng has been out of the Black Stars team on an indefinite suspension since 2014 after the FIFA World Cup in Brazil due to disciplinary reasons after “verbally assaulting” coach James Kwasi Appiah during the 2014 World Cup in Brazil.

While former Black Stars head coach, Kwesi Appiah, did not face a lot of questions of Boateng’s possible return, his successor, Akonnor, has had the question thrown at him very early in his new job and in an interview with Benedict Owusu of Joy Sports on Monday, he stated that Boateng could come back into the team if he was cleared by the FA.

“If Kevin-Prince Boateng is available, why will I not give him a call-up?

He has played before, he has done well, but there were some issues, we cannot also deny that. But if he is doing well and is actively playing and he is strong why not?

But whatever it is, I will need to talk to the FA about it and if he is welcomed, I call him once he is cleared.

There are issues that I cannot discuss with you but if he is interested, I will call him if everything is settled.

Even before my first press conference, I had a chat with him and the stories that emerged from that conference caused some issues but he later he came back to clarify things.”

Does Boateng want to return to the Black Stars?

The player seems willing to feature for the team again and he told his brother, Jerome, in a recent Instagram chat that he was open to the idea of wearing Ghana’s colours again especially as it offered a chance for proper closure after the incidents of 2014 in Brazil.

“With the national team, I didn’t like the way it ended because they gave me so much. But you never know, maybe I can go back and play one more time again.”

The former Borussia Dortmund, Tottenham and AC Milan man has 15 caps and two goals for the four-time African champions.