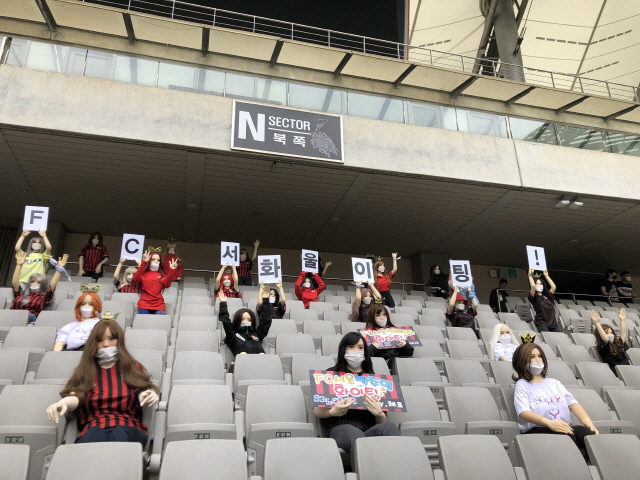 Football is back – but not as we know it.

The coronavirus pandemic has chewed up the beautiful game and spat out a version we’re not familiar with.

No fans inside the stadium, no team celebrations and socially distanced substitutes bench.

It’s all a bit weird.

As each country slowly returns to action, we’ll see different variations of how they’re attempting to combat the virus and play football at the same time.

Over in South Korea’s K-League, they’ve found a pretty interesting way to build some sort of atmosphere into their empty stadiums.

Many teams are pumping noise into the stadiums.

0-0 after 15 minutes, and so far the only standout from the game are the plastic fans FC Seoul have placed in the stands.

Why? We really couldn’t tell you…

Many fans believe that an adult shop has supplied these sex dolls with some of them holding sponsorship signs for the shop in question.

FC Seoul put these mannequin supporters in stands which was also tried by Dinamo Brest.

But there is a strong conviction that these ‘fans’ are actually ‘sex dolls’ made by a sex doll company.

Hope it is not true, but if it is, it’ll be a huge shame. pic.twitter.com/2tVOK2OJhT