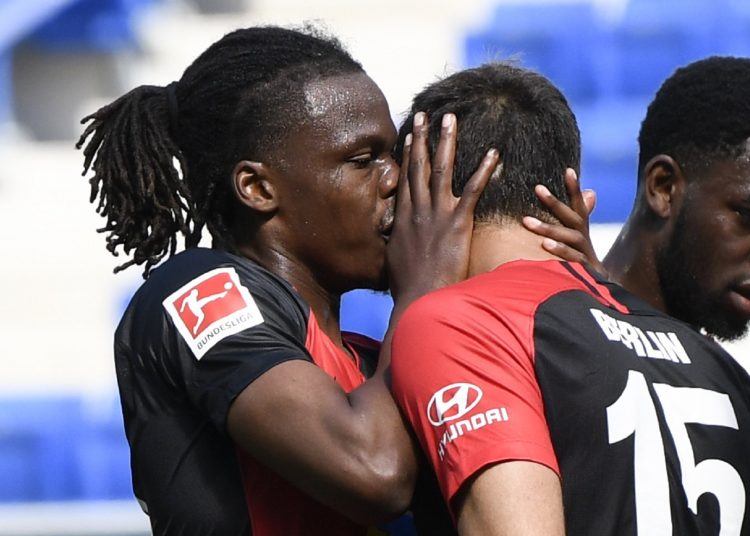 Hertha Berlin player won’t be punished for hugging and kissing as they enjoyed a much-needed victory when German football resumed on Saturday, the Bundesliga confirmed after the match.

In order to obtain the political green light to resume this weekend, the Bundesliga agreed on strict rules to avoid the spread of coronavirus.

Yet, while players in other games celebrated with elbow taps or solo dance routines, as they won, 3-0, in Hoffenheim. Hertha started the game 13th in the table with only seven wins in 25 games and under new management. Their Belgian defender Dedryck Boyata kissed team-mate Marko Grujic on the cheek after their team’s first goal.

“The fact is that this is part of football,” said Bruno Labbadia, who was named as Jurgen Klinsmann’s replacement during the lockdown. “We’ve been tested so many times that we can allow it.” If you can’t celebrate anymore, the whole thing breaks down. I’m just glad that the team had reason to cheer today. Emotions are part of the game.”

The German Football League (DFL) had presented the German authorities with a 51-page document, which convinced the federal government and regions that football could be allowed to resume behind closed doors.

In an accompanying document sent to clubs, the DFL said hugging and hand contact in celebration of goals should be avoided and that preference should be given to “elbow or foot contact”. But on Saturday, a DFL spokesman confirmed there would be no punishment, as it had only offered “guidelines” on how goals should be celebrated.

“For celebrations, only advice has been given and therefore there can be no sanctions,” a DFL spokesman said. As part of its programme to ensure a safe return, the DFL has tested players and coaches regularly for the virus and teams have been in quarantine for the past week.