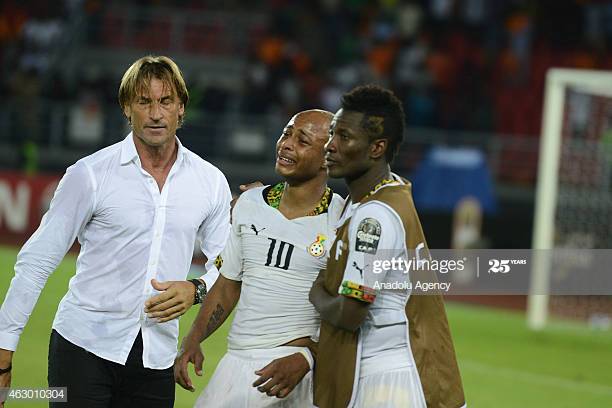 Now the head coach of the Saudi Arabia national team, Renard worked under Claude Le Roy as the Black Stars’ physical trainer during the 2008 Africa Cup of Nations.

The 51-year-old, in an interview with TV3’s Juliet Bawuah, touted Gyan had qualities that should have seen him achieve better than he had in his illustrious career but expressed reservations about the striker’s attitude to training saying:

“The quality of Asamoah Gyan was amazing. I was always impressed with his timing of headers. He was a very good goalscorer, fantastic player, amazing player.

But Gyan disagrees with the perception, arguing that there was more to delivering consistently than just ‘killing’ himself at training.

The former Sunderland hitman is quoted by a Footy-Ghana.com source as saying:
“I am not lazy. I put in 70% hard work and practice the basics needed at training. And, then, I give everything I have in games.

Footy-Ghana.com gathers Herve Renard’s opinion of Gyan’s attitude to training could be informed by an incident that occurred in the Stars camp. The striker, then with, had spoken up against the excessive nature of the physical training the Frenchman was putting the team through at training, our source revealed.