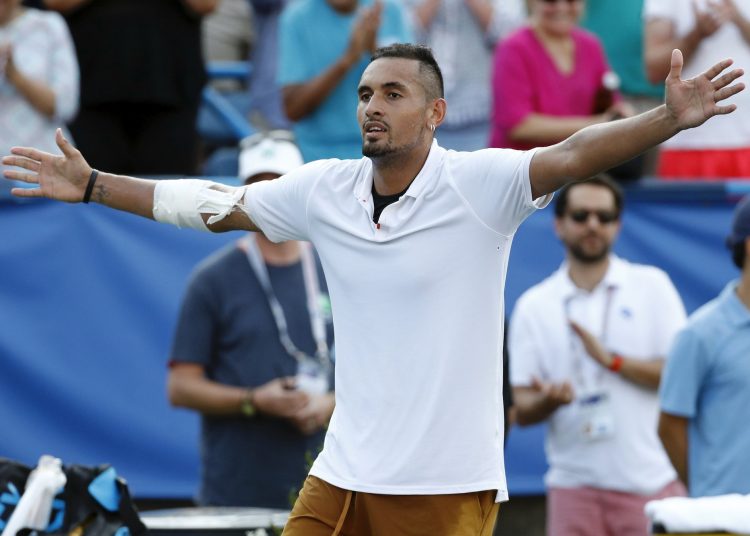 Nick Kyrgios is hands down the bad boy of today’s tennis scene.

Even though we hate to admit it, lots of girls love bad boys… especially famous ones.

This is definitely the case for the talented, but often distracted Australian, who admits that him “seeing” fans when not in a relationship is a weekly occurrence.

This edition of “Tennis Bad Boy News,” came at around 6 am on a Twitch stream Q&A. He was asked if he had ever slept with a fan, and his response was: “Yes, in all seriousness if I’m not seeing someone it’s like a weekly thing.”

Going into what we said earlier about him being often distracted, he then reminisced about the time he was playing Roger Federer at the Laver Cup, and in his own words was “slicing him up.”

He then saw an attractive woman in the crowd… and was immediately distracted.

He then went further in his dating life and remarked that he was particularly infatuated with Eastern European women.

He even went so far as to say that if she is tall, and from East Europe, that she could take half of his earnings.

His love of Eastern Europe’s best was shown in his last REAL relationship with Russian tennis player Anna Kalinskaya. However, this didn’t help his reputation in the dating scene.

After their breakup, she went on everyone’s favourite ongoing internet reality show known as Instagram, and posted that he was a “f****** energy vampire,” and that he was “not a bad boy, but just a bad person.”

When asked about this, Kyrgios only had to say that “nothing happened,” and that they “went their own separate ways,” but they “had some fun memories.”

We don’t know if this hurts his reputation as bad as spitting on an umpire, but being called an energy vampire is not a good sign.

However, that clearly doesn’t stop him from “dating” on a weekly basis.