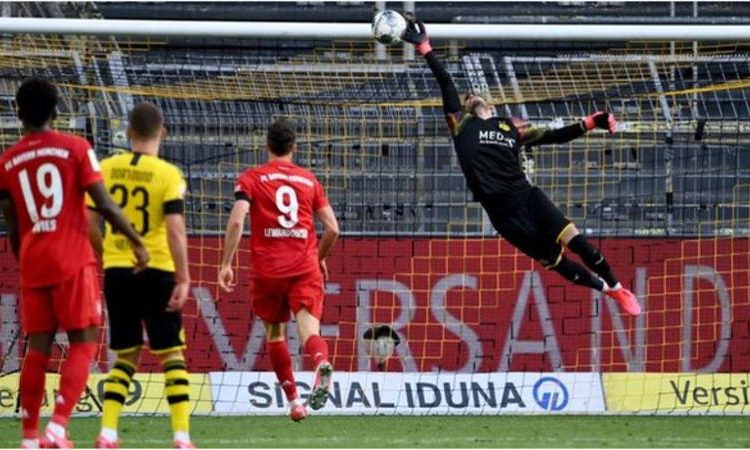 Leaders Bayern Munich took a big step to retaining their Bundesliga title by winning away from home at second-placed Borussia Dortmund.

Joshua Kimmich’s wonderful chip from 20 yards gave Bayern the lead just before half-time after both sides had efforts cleared off the line.

Dortmund brought on England’s Jadon Sancho in the second half, but he could not inspire a fightback from his side.

Robert Lewandowski nearly doubled Bayern’s advantage late on but shot against the post. Minutes later, he and the rest of the Bayern players were celebrating what could prove to be a big three points in the title race.

Resolute Bayern do enough to win

Before the game the build-up focused on Lewandowski and Dortmund’s Erling Braut Haaland, with both strikers having scored 41 goals in 35 domestic games this season – putting them level as top goalscorers in Europe.

Haaland nearly got his 42nd domestic goal of the campaign inside the opening 35 seconds when he shot through the legs of Bayern goalkeeper Manuel Neuer – making his 400th Bundesliga appearance – but Jerome Boateng was well placed to hack the ball off the line.

Dortmund then had the ball in the net when Thorgan Hazard headed in, but an offside earlier in the move ruled the effort out.

Bayern got more involved in the game and had a number of chances. Serge Gnabry had an attempt backheeled off the line by the retreating Lukasz Piszczek before Kingsley Coman and Leon Goretzka were both denied by home goalkeeper Roman Burki.

However, Burki will be unhappy that he could not keep out Kimmich’s lofted effort just before the break as the Switzerland international got his hand to the ball but it still went in.

Dortmund, despite the introduction of Sancho at half-time, struggled to create clear-cut chances in the second half and Haaland was replaced by Giovanni Reyna with 18 minutes remaining.

But the home side had a chance to grab an equaliser when Raphael Guerreiro had a free-kick just outside the penalty area but could only shoot straight at Neuer. Mahmoud Dahoud also had a late effort saved by Neuer on a frustrating afternoon for the hosts.

Bayern closing in on eight in a row

Dortmund, under the guidance of now-Liverpool manager Jurgen Klopp, won the Bundesliga in 2010-11 and again the following season in 2011-12 but Bayern have won the title every year since.

They are now in pole position for their eighth successive title, which they will secure if they win four of their final six matches.

This result continued a remarkable unbeaten run in all competitions that now stretches to 18 matches since they lost 2-1 at Borussia Monchengladbach on 7 December.

Bayern, who are also in the semi-finals of the German Cup and hold a 3-0 advantage over Chelsea after the first leg of their Champions League last-16 tie, have now won 21 of the 24 matches since Hansi Flick moved up from assistant to replace the sacked Niko Kovac in November – when Bayern were fourth in the table.

Before the match, dubbed Der Klassiker and played in front of no spectators at Signal Iduna Park because of coronavirus restrictions, he said: “Regardless of the result, nothing will be decided.”

However, Kimmich’s goal means Bayern have a commanding grip on the Bundesliga and another title is theirs to lose.