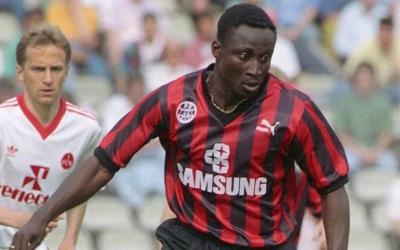 Legendary Ghanaian forward, Tony Yeboah, arguably put his name on the global map during his time in Germany.

The mercurial forward stole the show in his first stint in Germany, most notably with his back to back top scorer awards with Eintracht Frankfurt in the 1992/93 and 1993/94 seasons.

However, all that may never have happened due to his reluctance in leaving Okwawu United for Germany, due to the love and gifts he received from fans of Okwawu United.

“I didn’t exactly want to leave because I was enjoying Ghana, he said in an interview with GTV Sports.

“Those times after a game for Okwawu United I would walk through Kantamanto and get money from people.

“I was very proud of myself at the club and didn’t want to go to Germany, but Abrah Appiah thought it was a very big opportunity for me, so I took it.”

After a couple of difficult trials in the European country, he finally signed for Saarbrucken, the first of 3 German sides he played for.

Yeboah spent 10 years in Germany in two separate stints over the course of his careers scoring 96 Bundesliga goals in the process – the second highest scoring African in the league’s history, behind Pierre-Emerick Aubameyang.