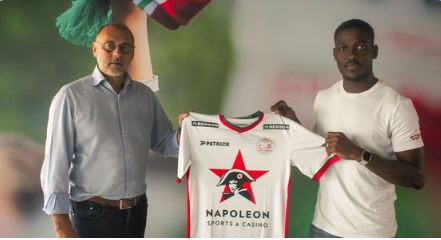 Opare joins the Essevee on a two-year deal from fellow Belgian outfit Royal Antwerp after passing a mandatory medical test at a private hospital in West Flanders.

The 29-year-old becomes the Zulte’s first acquisition ahead of the summer window.

Zulte Waregem is the Ghanaian’s third Belgian club after stints with Standard Liege earlier on in his career.

He is expected to use his huge experience to help the club challenge for titles and a place in Europe after they finished in 9th spot last season.

“I played against Zulte Waregem a few times and it is a strong team with a lot of ambition. In addition, the great support from the supporters is added. I can’t wait to start the season!” Daniel Opare told Essevee TV.

“Due to the corona crisis, the transfer summer starts later than usual. We are happy to make our first move in early June, ”says CEO Eddy Cordier. “It was no secret that we were looking for a right and left rear. With the arrival of Daniel, we have already been able to fill one of those positions perfectly. ”