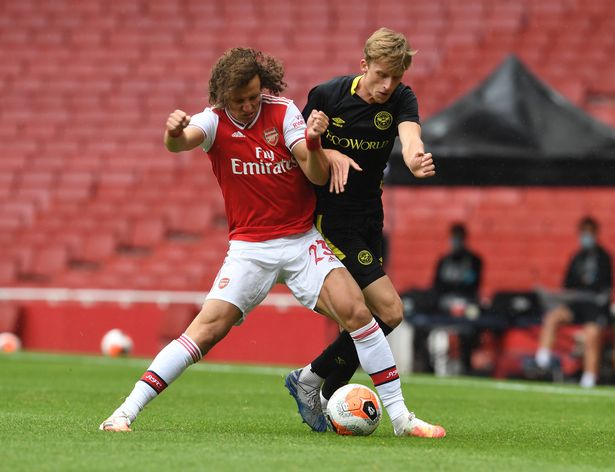 David Luiz is one player who usually divides opinion.

Sometimes he produces some really magical moments but due to his frenetic style of play, he is often susceptible to some ridiculous moments.

With Arsenal returning to Premier League action on June 17 against Manchester City the North London club has been stepping up preparations.

They faced Championship side Brentford in a match behind closed doors.

With Arsenal already a goal up after Joe Willock had scored, Luiz picked up the ball near the halfway line in the second half.

He dwelt on the ball for much longer than he should have and was dispossessed.

Ghana’s Tarique Fosu eventually rifled the ball into the back of the net to level things up for Brentford.

Alexandre Lacazette scored for Arsenal but Brentford eventually won the match 3-2 with goals from Halil Dervisoglu and Shandon Baptiste.

The reactions from Arsenal fans to Luiz weren’t kind, with opposition supporters having fun at his expense.

What is that defending 🤢

People don’t change just because there was a pandemic or a lockdown. Good Luiz good!

David Luiz doing what he is known for. Attacking & taking useless risks instead of defending. Nothing new sadly. Désespérant. Ridiculous. He’ll never learn.

Others were more impressed by the strike from Tarique.

David Luiz is looking lively ahead of the Premier League restart. pic.twitter.com/otQ7Nv2v4U

VIDEO: Agyemang Badu narrates how 'the Grace of God' saved him from death