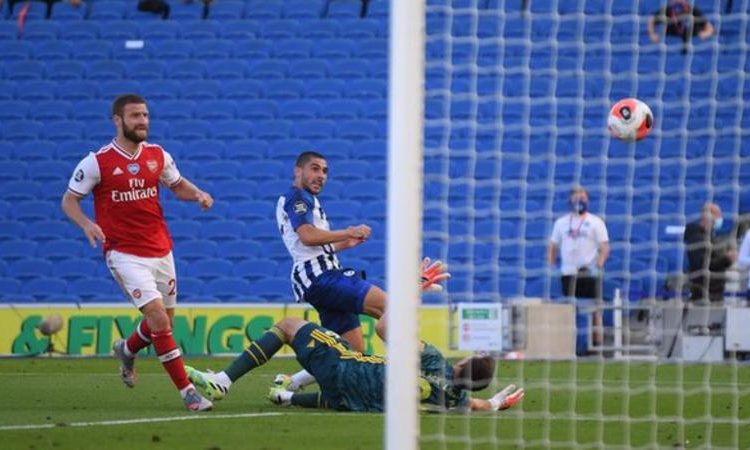 Neal Maupay scored the winner five minutes into added time as relegation-threatened Brighton clinched a huge win over Arsenal, who once again lost a key player to injury.

The French striker showed coolness and class to slot in his ninth and most important goal of the season, give Albion their first league win of 2020 and cap a remarkable comeback.

Nicolas Pepe had fired the Gunners into a deserved lead with a superb curling shot with just over 20 minutes to go, but Lewis Dunk scrambled an equaliser over the line from close range to set up a barnstorming finish.

Maupay’s winner was a sucker punch for the Gunners, who have now lost back-to-back games since the Premier League returned – results that surely make a late run to Champions League qualification very unlikely.

They may also have to navigate the rest of the season without goalkeeper Bernd Leno, who was stretchered off after landing awkwardly on his ankle in the first half following an aerial challenge with Maupay.

Maupay’s role in the incident seemed to anger Leno’s team-mates, some of whom became embroiled in a shoving match with the striker at full-time.

Leno joins defender Pablo Mari and midfielder Granit Xhaka on the sidelines, both of whom were injured in Wednesday’s 3-0 loss at Manchester City.

There is no such negativity for Brighton, though. They appeared to come through the game largely unscathed and are now five points above the bottom three.