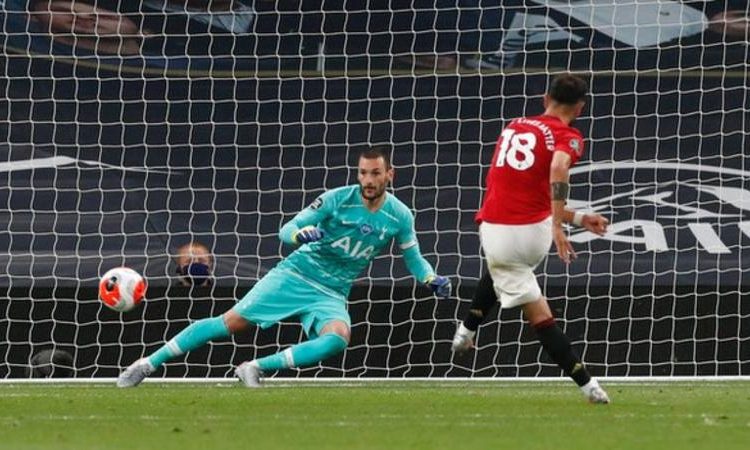 Paul Pogba returned to action for first time since 26 December to win the late penalty that earned Manchester United a crucial point at Tottenham Hotspur.

Pogba, who had not played for almost six months because of an ankle injury that needed surgery, emerged as a second-half substitute and demonstrated he has the creativity to make a difference as United battle for a place in the top four.

United keeper David de Gea was badly at fault when he failed to stop Steven Bergwijn’s powerful 27th-minute drive, so there was relief all-round for the visitors when Pogba surged into the area before he was hauled down clumsily by Eric Dier.

In the cavernous spaces of the deserted Tottenham Hotspur Stadium – as the match was played behind closed doors – Fernandes equalised with an emphatic penalty.

Spurs survived a last-minute scare as referee Jon Moss pointed to the spot again when Dier collided with Fernandes but the video assistant referee correctly reversed a poor decision.

De Gea made a measure of amends with a superb save from Son Heung-min shortly after his error, while Hugo Lloris made a magnificent flying save from Anthony Martial as United chased an equaliser.

It finally arrived via that Fernandes spot-kick nine minutes from time to leave United in fifth place, four points ahead of Spurs.

Manchester United manager Ole Gunnar Solskjaer kept faith with the side that went 11 games unbeaten in all competitions as their season restarted here in north London – which meant no place for Pogba, despite his recovery from injury.

It was no surprise, however, when he was called into action just after the hour to inject some zest into what had been a lifeless United performance up to that point.

Pogba was right in the fray, having a shot instantly – but he made his most significant contribution when he tricked Dier in the area and drew a foul from the Spurs defender to win that point-saving penalty.

It was a timely reminder to Solskjaer, should he even need one, of the rare talent he has at his disposal if Pogba could only show consistency and put the speculation about his future behind him.

De Gea did not have such a good night. There were already questions about his form before this game and he produced another error here – all with Dean Henderson’s reputation growing in his loan spell at Sheffield United.

Roy Keane: De Gea and Maguire should 'get taxi back to Manchester'[VIDEO]