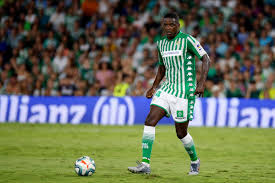 Portuguese midfielder William Carvalho could soon be featuring in the English Premier League according to reports from Spain.

The 28 year old has spent the last two seasons in the Spanish La Liga with Real Betis but could join Everton FC according to Marca.

The player is reported to have agreed personal terms with Everton and is now waiting on the two clubs to agree a transfer fee.

In the past Carvalho has been courted by the likes of Arsenal and Tottenham but failed to make the move.

See the 7 most expensive cars owned by African football stars