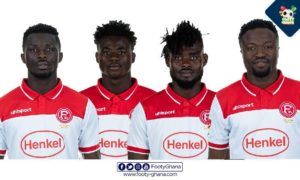 Four more Ghanaian players suffered relegation Saturday as a result of a 3-0 Union Berlin victory over Fortuna Dusseldorf in the final round of the 2019/20 German Bundesliga.

Kasim Adams, Bernard Tekpetey, Nana Opoku Ampomah and teenager Kelvin Ofori’s efforts throughout the campaign were not enough to keep the side up for another topflight football after gaining promotion only the previous season.

Fortuna Dusseldorf did themselves no favours on the final day of the season as the defeat to Union saw them finish last but one on the log with 30 points, just one behind 16th-placed Werder Bremen who now have an opportunity to fight for survival through a play-off.

Interestingly, the Ghanaian quartet were not involved in the match-day squad that made the trip to face Union Berlin.

They increase the number of Ghanaian players to suffer demotion from the Bundesliga this season to five after Black Stars new boy Christopher Antwi-Adjei whose side FC Paderborn also make a quick return to second-tier football after finishing bottom of the league. Paderborn knew their fate way before the final day of the season.

How the Ghana boys at Fortuna fared in the Bundesliga this season:

Both centre-back Kasim and forward Tekpetey joined Fortuna Dusseldorf on loan from TSG Hoffenheim and Schalke 04 and are expected to revert to their employers.

Tekpetey, however, may continue at Merkur Spiel Arena as his loan agreement was for two seasons.

Nana Ampomah and 18-year-old Ofori were signed to long-term deals by Fortuna prior to the start of the 2019/20 season.