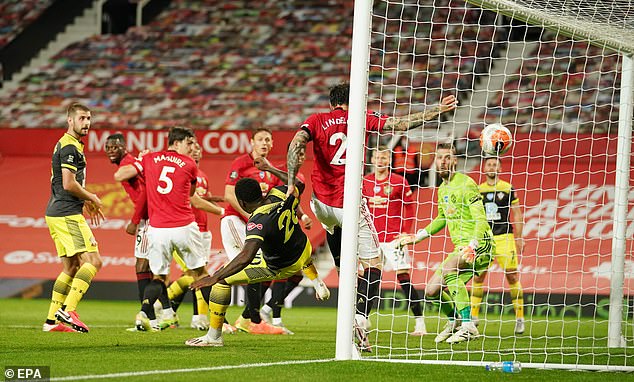 Manchester United captain Harry Maguire has been widely mocked on social media after his bizarre role in Southampton’s last-gasp equaliser on Monday.

The centre back, signed for £80million from Leicester last summer, appeared to have man-marked team-mate Aaron Wan-Bissaka for the stoppage time corner – leaving Michael Obafemi free to tap home.

And after United were dealt the blow in their chase for Champions League football, rival supporters have taken to Twitter to tear into the defender.

The hosts appeared set to secure all three points at Old Trafford after goals from Marcus Rashford and Anthony Martial, but they were pegged back in bizarre fashion following some penalty area chaos.

Footage shows Maguire with his arms around Wan-Bissaka, while the goal scorer Obafemi was allowed to ease the wrong side of Victor Lindelof behind him and prod home from a matter of inches.

The England international is likely to have attempted to use his team-mate as leverage to steer a header away, but the moment of madness instead led to United having to settle for a share of the spoils.

If I say he’s a Panasonic refrigerator then people go bore. What is this 😂😂😂😂😂😂 https://t.co/bLkR1ofY3P

One user labelled Maguire ‘the more expensive version of (David) Luiz with a bigger head’ – referencing the under-fire Arsenal defender after his string of high-profile errors this season.

Another also alluded to Luiz and described his United counterpart as a ‘pub player’.

A third wrote: ‘Maguire has been shocking on every cross… did the same thing on Southampton’s first goal. Shambles of a defender.’ 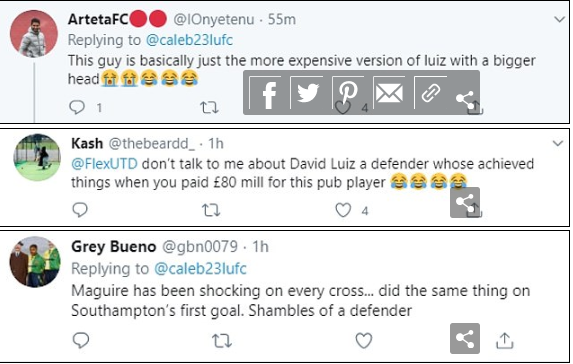 'Money No Be Problem': The 5 players Manchester City plan to sign this summer