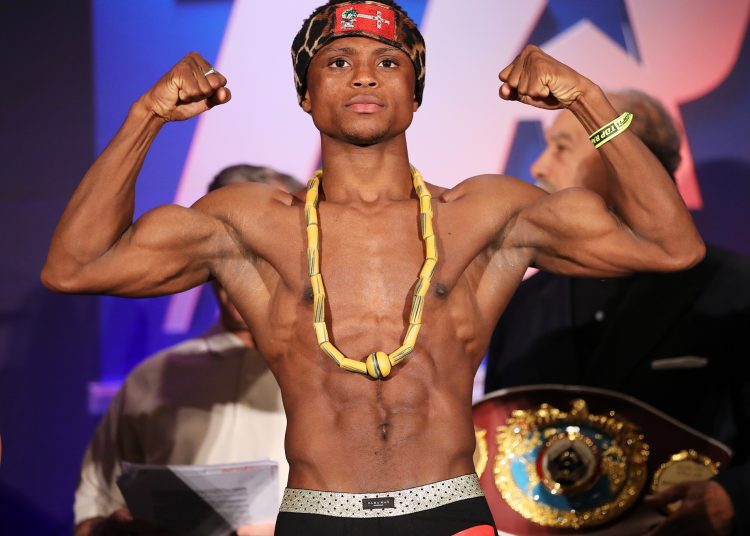 Ghanaian boxer, Isaac Dogboe, believes he is in the right shape physically and spiritually as he looks to return to the ring with a win later tonight.

Dogboe faces American, Chris Avalos in a featherweight bout as he hopes to recover from his two losses against Emmanuel Navarrete.

Dogboe’s two very high profile losses led to a short break from the sport but he returns to take on Avalos in a featherweight fight at the MGM Grand in Las Vegas.

There’s a lot of pressure on Isaac Dogboe to beat Avalos tonight as, despite his impressive 20-0-2 record, he has lost his last two fights.

A third straight loss might raise serious doubts about whether the young boxer can ever recover his form.

Dogboe, who has been training with Barry Hunter after his father, Paul Dogboe came in for a lot of criticism after his last bout, expressed his confidence ahead of the fight.

“Right now I feel great, I’ve been with Barry since December of last year,” said Dogboe.

“He’s seen me go through the process and everything, and I feel great. I feel great mentally, physically and spiritually. So right now I’m at peace, I’m just ready to roll. I can’t wait to get back in the ring.”

Dogboe says his faith has kept him going despite the recent disappointments and will continue to drive him on.

“It’s in my nature, I believe in faith. And I believe faith is what drives me. You might see confidence — but I see faith.”

Hunter praised Dogboe’s work ethic and his willingness to learn and regain his confidence.

“That’s going to be key. Skillwise, yes, he can fight, but it’s like a baseball player who could’ve been a legend but got hit with a beanball. And then every time he stepped up to bat, he’s scared, or he flinches.”

Dogboe was on a rapid rise in the sport before his losses to Navarrete and will hope to recover that winning feeling tonight.

He definitely has to support of Ghanaians in this regard with Sports Minister, Isaac Asiamah wishing Dogboe well ahead of the bout, saying the boxer had learnt lessons from his losses to Navarette and will return stronger against Avalos.

“Even though Isaac Dogboe lost the last two fights against Emmanuel Navarrete, ‘the royal storm’ has shown a lot of tenacity to return to the ring for a featherweight title and has learnt all the lessons to overturn his defeat.”

“Ghanaians are very confident that Dogboe will come out victorious in this encounter and make Ghana proud after the bout.”