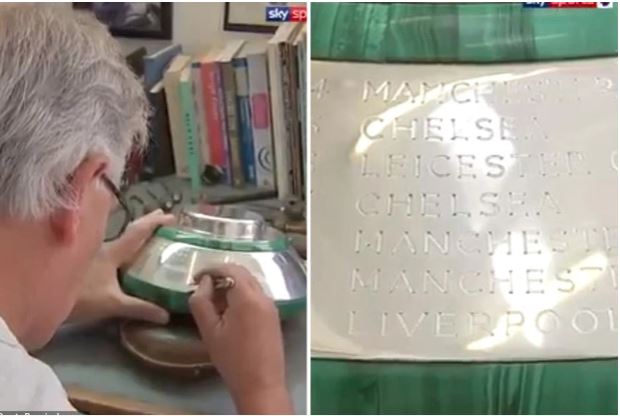 Liverpool finally have their name on the Premier League trophy as Jordan Henderson prepares to lift the club’s first top-flight championship in 30 years.

The Reds skipper will hoist the coveted trophy in the air on Wednesday night after the Merseyside outfit’s last home game of the season against Chelsea.

And it’s all becoming real for Liverpool fans as they count down the hours until they can celebrate their stunning season in style.

Sky Sports posted a video on Twitter on Tuesday where they showed an engraver applying the finishing touches to the Premier League trophy.

Liverpool won the title last month after Manchester City lost 2-0 away to Chelsea at Stamford Bridge.

No side has won the Premier League earlier than Jurgen Klopp’s men, who clinched the title with seven games to spare.

What a start to the day for #LFC fans everywhere! 🌤🏆

Here's a look at the Premier League trophy ahead of tomorrow night's presentation for the champions…🔴🔥pic.twitter.com/r4j24GauqQ

But their form has dipped of late, suffering two defeats against Arsenal and the Citizens, while they were also held to a 1-1 draw against Burnley at home.

However you can be sure that Liverpool will be wanting to put on a show in their final game of the campaign at Anfield – a ground they haven’t lost at in the league since April 2017.

Ahead of the Chelsea clash, Klopp has insisted that supporters should expect to get used to winning trophies, with the Premier League title not the last “milestone” for his team.

Speaking in the pre-match press conference, he vowed: “It is a milestone, that is for sure, an important day but definitely not the last.”

And the German gaffer also declared he expects his team not to suffer a defeat against the Blues.

He said: “People maybe think Chelsea will win the game and Liverpool will have the trophy anyway afterwards.

“I don’t think we will lose the game – we will be in a proper mood for it. But it’s what we do on the pitch that matters. I trust my players and myself 100 per cent.”

'I'm at peace, I'm ready to roll' - Isaac Dogboe confident ahead of return to the ring tonight