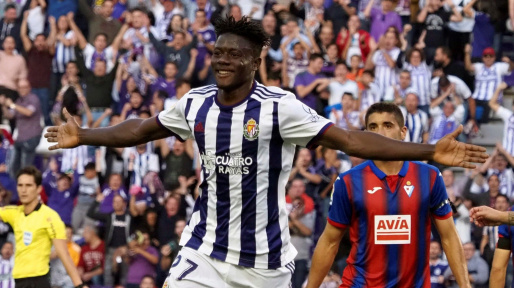 Southampton CEO Martin Semmens has confirmed the club is in the process of completing a deal for Real Valladolid centre-back, Mohammed Salisu.

Last week, reports indicated that the 21 year old Ghanaian had signed a four-year contract after the Saints met his £10.9million release clause with an official announcement imminent.

In just his first season of senior football, Salisu made headlines in the Spanish La Liga with a streak of fine performances which attracted the interest of a host of top European clubs.

Southampton however, have shed light on issues surrounding their anticipated signing of the Real Valladolid centre-back.

“This one probably has a bit more truth to it. It has been very clearly documented, to my surprise, exactly what has been happening.

“He is a player we have looked at for a long time, a really high-quality young player in Europe who would really add something to our squad.

“We are in a process and we hope that we are lucky enough to get him. We are very aware that some of the biggest and best clubs in Europe have looked for him.

“We offer him something different, which is a pathway to get better, physically, and technically playing in the first team in the Premier League.

“We hope that opportunity and the pathway we have shown for other players will attract him here, but we’ll know more soon.

“It would be truthful to say that we have had that discussion. These things are complicated, but it is fair to say to everyone that he is one we are looking very closely at.”

Salisu made 31 appearances for Valladolid last season, starting 30 of them.