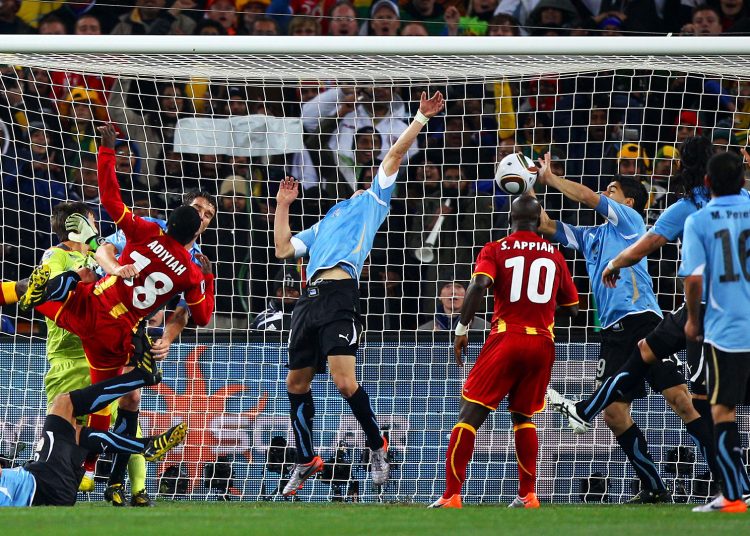 Former Ghana defender, John Paintsil, has labeled Luis Suarez a cheat, and says he is still reeling from Ghana’s defeat to Uruguay at the 2010 FIFA World Cup.

Ghana was on the verge of a semi final appearance when Barcelona’s Luis Suarez, then with Ajax Amsterdam, scooped a goal bound Dominic Adiyiah header out of goal.

Asamoah Gyan missed the resultant penalty and Ghana went on to lose in the shoot-out.

Paintsil, speaking on CitiTV’s Football Made In Ghana, says a goal should have been awarded Ghana instead of a penalty .

“It was very difficult.

“I can’t remember walking to the team bus after this game, he said.

“All I can recall is people telling us that we had done well and we had made Africa proud.

“We needed that lift but that is not what we were looking for.

“For me, I feel cheated. Look at the way he used his hand to clear the ball, which is not fair.

“It was a cheat, because if his hand was down and the ball hit him, then we can say it was ball to hand, but for you to lift your hand and clear the ball from the line, it has to be a goal.” He concluded.

Victory against Uruguay would have made Ghana the first African country to make it to the semi-finals of the World Cup.

The manner in which the Black Stars lost that quarter-final is a memory that would forever remain in the minds of Ghanaians.