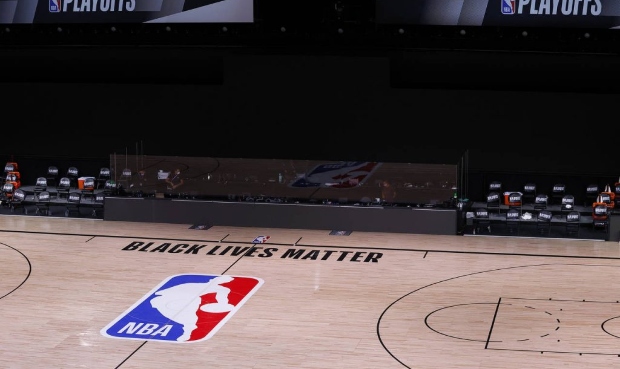 NBA teams are boycotting their playoff games to protest the police shooting of 29-year-old Jacob Blake, who is black. Black Lives Matter protests have surged across the US once more this week in response to Kenosha, Wisconsin, police paralyzing Blake by shooting him in the back seven times on Sunday.

The boycotts began with the Milwaukee Bucks on Wednesday in their game with Orlando Magic.

“Some things are bigger than basketball. The stand taken today by the players and org shows that we’re fed up,” Bucks Senior Vice President Alex Lasry, who is the son of Bucks owner Marc Lasry, tweeted after news of the boycott began to spread. “Enough is enough. Change needs to happen. I’m incredibly proud of our guys and we stand 100% behind our players ready to assist and bring about real change.”

The Bucks players are staying in the locker room trying to reach Wisconsin Attorney General Josh Kaul, reports The Athletic and Stadium’s Shams Charania. Magic responded saying it stands with the Bucks and with all NBA players and the league “in condemning bigotry, racial injustice and the unwarranted use of violence by police against people of color.”

All three games for today — Bucks-Magic, Thunder-Rockets and Lakers-Blazers — have now been canceled. It’s unclear whether tomorrow’s game between the Jazz and Nuggets will go ahead as scheduled. Earlier reports on Wednesday suggested that Game 1 of the Eastern Conference semifinals between the Boston Celtics and Toronto Raptors, also set for Thursday, would be boycotted by players in response to the shooting.

Black Lives Matter protests have continued across the US since June as people demonstrate against the deaths of George Floyd, Breonna Taylor and Ahmaud Arbery at the hands of the police, and against systemic racism. Two people were shot to death and another was wounded during the third night of Jacob Blake protests Tuesday night. A 17-year-old from Illinois has been arrested as a result.

Since the NBA season resumed following coronavirus delays, most players have been taking a knee during the national anthem prior to the games. “Black Lives Matter” is painted on each of the three courts in the NBA bubble at Walt Disney World, Florida, and players are also able to wear social justice and civil rights messages on their jerseys.

All WNBA games are likewise cancelled tonight, according to a report, while in MLB the Milwaukee Brewers and Cincinnati Reds have cancelled their game. The Seattle Mariners also voted to cancel their MLB game.