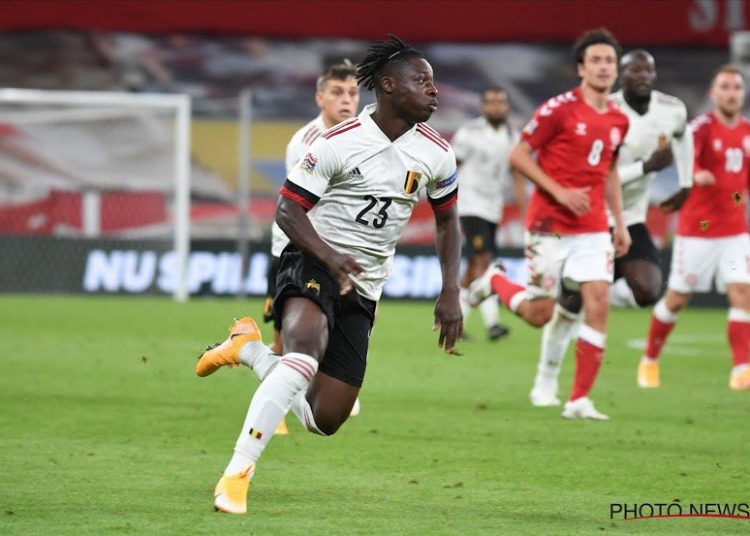 Ghana may have lost a rare gem as Jeremy Doku made his Belgium debut in their 2-0 win over Denmark in the UEFA Nations League.

The forward was an 87th-minute substitute for Youri Tielemans which now renders him ineligible to switch nationalities unless FIFA changes the rules.

Jeremy Doku earned his call-up to Roberto Martinez’s team after an impressive start to the season, playing all 360 minutes in the new Belgian Jupiler League and has scored a goal and provided an assist too.

“Proud moment for me to represent my country. The start of a journey at Belgium Red Devils,” Doku posted on Twitter after his debut.

Proud moment for me to represent my country 🙏🏾❤️ The start of a journey @BelRedDevils 🙌🏾🇧🇪 pic.twitter.com/5YoPxPhfR5

Until making his first appearance for the European powerhouse, he was eligible to play for the Black Stars of Ghana due to the fact that both his parents are Ghanaians.

In August, the coach of the Black Stars, Charles Kwablan Akonnor stated that Jeremy Doku, among six others, is on his shortlist of European born-Ghanaians he is courting for the national team.

Ghana is also keen to persuade English duo, Eddie Nketiah of Arsenal, and Tariq Lamptey of Brighton and Hove Albion.

The world football governing body, Fifa has proposed amendments to the current rules governing eligibility, with the new guidelines set for approval at a September 18 Congress.

The new wording would let players switch eligibility if they played a maximum of three times for the first national team–including tournament qualifying games–before they turned 21, and at least three years earlier.

If the new rule is passed successfully, Doku will become eligible to represent Ghana.

Chelsea winger Callum Hudson Odoi, who currently has three senior caps for England at senior level, could benefit from the proposed rule be enforced.

Greenwood, Foden reportedly ‘kicked out’ of England camp after bringing in ladies to team’s hotel in Iceland