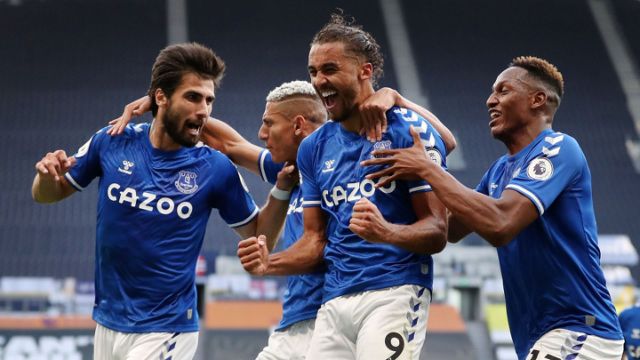 Dominic Calvert-Lewin’s brilliant header ensured new-look Everton made a flying start to the Premier League season with victory at Tottenham.

Calvert-Lewin gave Hugo Lloris no chance after connecting with Lucas Digne’s in-swinging free-kick to earn the Toffees a first win over Spurs since 2012.

In a high-octane encounter, Jordan Pickford produced two excellent saves to keep out Dele Alli and Matt Doherty, who was making his debut after signing from Wolves.

But with new signing James Rodriguez in excellent form, Everton fully deserved their win after a hard-working performance.

Everton should have taken the lead in the early stages but Richarlison lost his footing after rounding Spurs keeper Hugo Lloris.