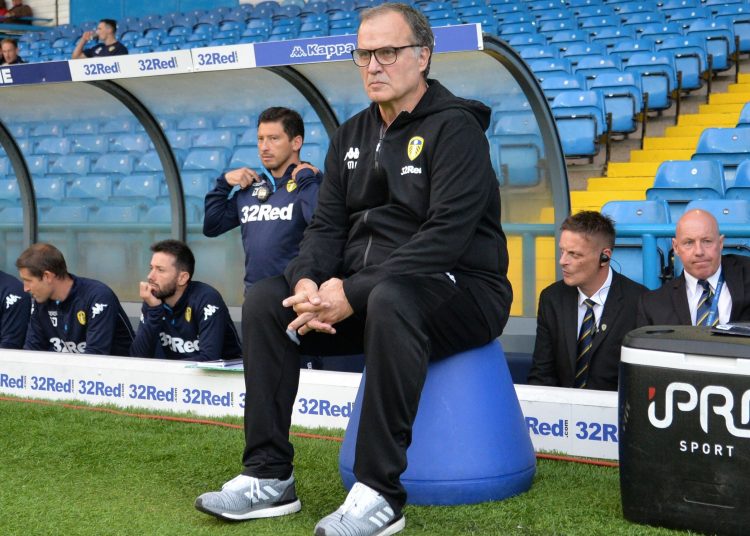 Leeds United returned to the English Premier League for the first time in 16 years with master tactician, Marcelo Bielsa at the helm of affairs.

It wasn’t only Bielsa making his debut in the Premier League, the bucket he sits on to watch games did too.

The Peacocks returned to the top tier with an entertaining and ultimately frustrating night as they lost 4-3 against Liverpool at Anfield.

For those who don’t know Marcelo Bielsa, think upgraded tactics of Pep Guardiola, the animalistic nature of prime Jose Mourinho, and a pressing game like Jürgen Klopp. Yes, that is Marcelo Bielsa who is also referred to as El Loco.

It would’ve been strange scenes for every spectator who did not know Bielsa and saw this coach sit on a bucket rather than the dugout where he is rightfully supposed to be.

Speaking on a BBC documentary last year, journalist Guillem Balague revealed why ‘El Loco’ sits on the bucket, saying, “He [Bielsa] walks the four miles from his home to the training ground.

“His intense walking during games and his moments of crouching down on what looks like a plastic bucket is his way of dealing with constant back pain that has not left him since his time as a player.”

Bielsa however has not always sat on buckets, but he noted for not often sitting in his dugout during games. He would rather squat, pace about the touchline than sit in the dugout.

Before joining Leeds, he used to sit on a cooler box but joining the Premier League club they provided him with a bucket that comes complete with a seat to make it comfy and even a sponsor’s logo.

It is thought that the 65-year-old also sits on the bucket because it gives him a better view than the sunken dugouts at Elland Road.

Asked about his seating arrangement early in his Leeds career, Bielsa said, “You want me to tell you more than what it is? It’s just a bucket.

“I have nothing to add. It’s a comfortable bucket.”

After a thrilling debut night for Bielsa against Liverpool that ended in a loss, he will be eager to claim his first win as they face fellow debutants, Fulham at Elland Road.