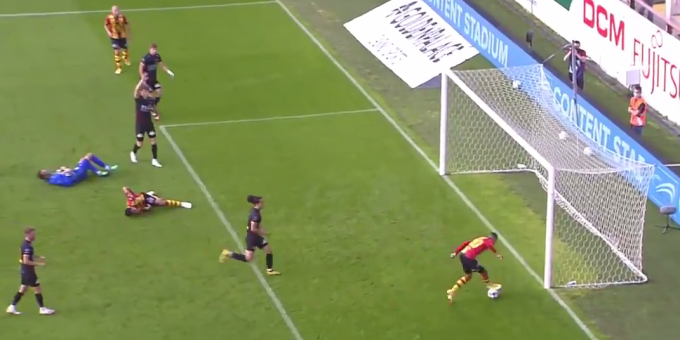 Aster Vranckx will forever be remembered in football fairy tales after he produced what can be referred to as the worst miss of all-time in football history.

During a Belgian Pro League match between KV Mechelen and Oostende on Saturday, Aster Vranckx produced one embarrassing moment of infamy.

Vranckx, 17, strangely missed an open goal from just one-yard as he side lost once again in the Belgium top-flight league.

The move started with a run down the left flank and a cross was hit into the middle of the penalty area. A poor defensive clearance saw the ball swirl in the air. As it fell down, the goalkeeper got a half-hearted punch and fell awkwardly in the process.

An attacker followed up with a half-volley which hit the bar. This left the ball falling to Vranckx in front of an open goal. He collected the ball on his chest, positioned himself to shoot, and then miscued his effort.

Vranckx, however, bravely responded after the shocking miss.

“I think I just had to kick the ball in. I took it wrong, and then I missed it,” Vranckx told Eleven Sports. “It’s a shame that I missed, but I’m just going to look at the next match and not let my head go crazy.”

His ridiculous blunder did cost Mechelen a win as Oostende went on to score an injury-time winner.

This miss by Aster Vranckx for Mechelen is all kinds of incredible pic.twitter.com/Fc8wsYAs3D

The 'Lionel Messi Rule' every Barcelona player has to follow