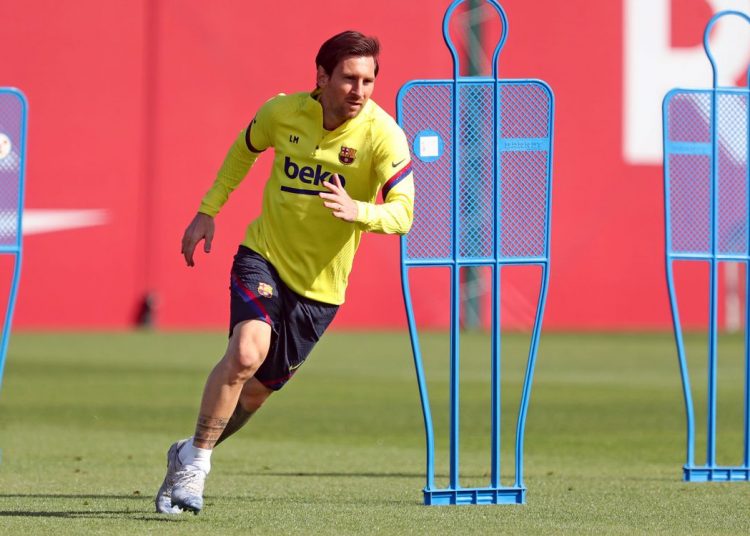 Barcelona players are banned from tackling Lionel Messi too hard in training according to a teammate.

Jean-Clair Todibo, who spent last season on loan at German side Schalke and he discussed training with the six time Ballon d’Or winner.

“We all knew that he couldn’t get injured,” Todibo told German publication Bild per Marca:

“I learned a lot from Messi and I even tackled him a few times, but I was careful not to hurt him.”

It’s not surprising to hear the lengths the Catalan giants will go to protecting their star man.

After failing to engineer a move away from Barcelona having issued a transfer request and refused to train, Messi reversed his decision and has since been back at the club’s training complex this week.

To begin with, Messi underwent a series of training drills on his own on Monday due to the Argentine not undergoing last week’s round of COVID-19 testing while he remained at home.

However, Messi showed his attitude and professionalism is still present by arriving earlier than other teammates on Tuesday and Wednesday before coming on the team’s allocated day off on Thursday.

Retaining the captaincy despite wanting out not too long ago, Messi is in line to be involved in Barcelona’s friendly against Gimnastic de Tarragona at the Johan Cruyff Stadium on Saturday night.

It comes after reports Messi held a meeting with new boss Ronald Koeman and told the Dutchman he was committed to the cause and made a promise that he’d return to his best form for the team this season.

Despite a trophyless season that finished with a damaging 8-2 defeat at the hands of Bayern Munich, Barcelona’s all time top scorer still managed to break a La Liga record, becoming the first player to score 20 goals and get 20 assists in one season last term.