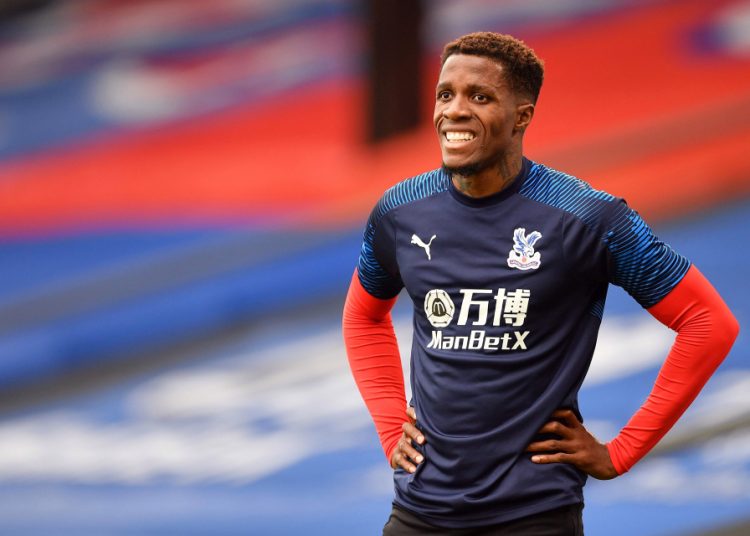 The former Red Devils defender was on pundit duties for Sky Sports on Saturday evening as United got their Premier League campaign underway against Crystal Palace.

It was inevitable Zaha’s name would be at the forefront of any discussion ahead of the game, with the winger having another chance to come back and haunt his former club – a chance he took with both hands.

Zaha is widely considered a Man United flop, having failed to make an impact following his £10m move from Palace in 2013.

He was Sir Alex Ferguson’s final signing before his retirement, but couldn’t play his way into Moyes’ plans and was ultimately sold back to the London club after making just four senior appearances in a Man United shirt.

But Evra pinpointed the exact moment Zaha’s Old Trafford career was over… and you can bet this topic of discussion did NOT feature in the production team’s plans for the Saturday Night Football show.

“We all know Wilfried Zaha is better than Crystal Palace, with all due respect, he’s such an electric player,” said the United legend, who then dropped the bombshell…

“I think what ruined his career for Manchester United is when he had this true or untrue affair with David Moyes’ daughter.

“Because I remember in pre-season he was playing in every game, but when that news came out… he was out of the game, and he disappeared.

“But what a player, and he will be a massive threat for Manchester United, he’ll be fresh and ready to attack and ready to hurt United.”

His prediction was 100 percent correct, as Zaha scored two stunning goals and United endured a nightmare start to the new Premier League campaign with a 3-1 defeat to Palace.

But, his other comments about Zaha may have landed the Frenchman in big, big trouble.

Zaha was alleged to have had a fling with Lauren Moyes during his spell in Manchester, although the Ivory Coast international has strongly denied those claims and has even insisted he has ‘never even met’ his former manager’s daughter.

At the time, the presenter reacted as best she could and tried to sweep the incident under the carpet: “We don’t know the background to that story, so probably best leave that one for now.”

Well, leave it for now they did, but Sky Sports were forced to revisit Evra’s comments after the incredible reaction online, with Cates reading out an official apology and retraction after the final whistle.

“We have to clarify a comment made earlier on the program, suggesting there may have been a relationship between Wilfried Zaha and the daughter of David Moyes,” said the host.

“We understand that Zaha had never met Moyes’ daughter and that the claim made by Patrice was false.

“We apologize for any offense caused.”