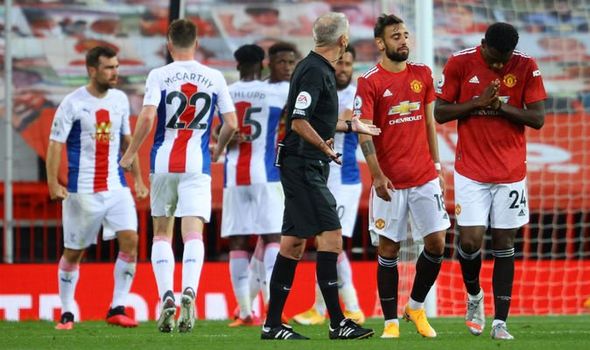 Wilfried Zaha scored twice on his return to Manchester United as a controversial retaken penalty helped Crystal Palace to an impressive 3-1 win at Old Trafford.

Zaha featured in just four games during his year-long spell at United earlier in his career, but he came back to haunt his former club as his retaken penalty (74) doubled Palace’s lead following Andros Townsend’s early opener (7).

In the game’s major flashpoint, referee Martin Atkinson awarded Palace a penalty after VAR Jon Moss instructed him to consult his pitch-side monitor. Jordan Ayew’s cross deflected off the arm of Victor Lindelof, but after Ayew’s spot-kick was saved by David de Gea, the Spaniard was deemed to have encroached on the taker.

Donny van de Beek came on for his United debut in the second period and the Netherlands midfielder reduced the deficit with a well-taken effort (80), but Zaha’s superb finish (85) ensured a second successive victory for Palace at Old Trafford.

The result keeps the visitors perfect this season with two wins from two while United suffered their first league defeat in 15 Premier League games stretching back to January.