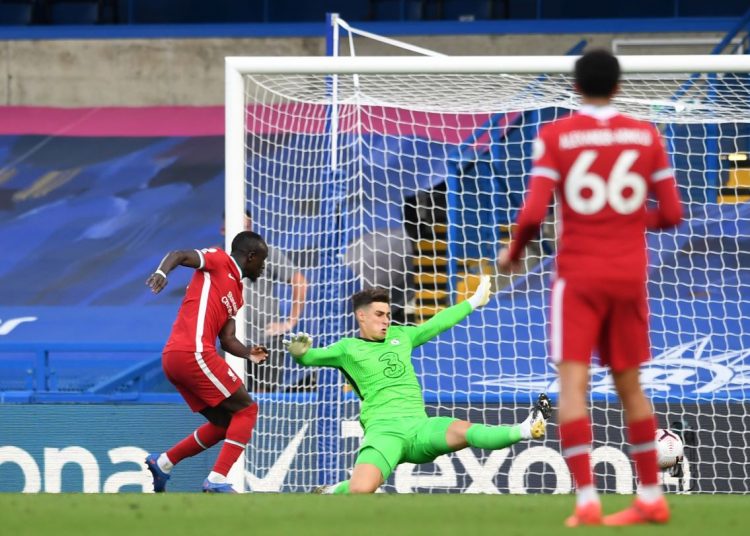 Jürgen Klopp’s Liverpool showed just how strong and resilient they are as they handed Chelsea a 2-0 defeat in their own backyard on Sunday, September 20, 2020.

The Blues fell to two Sadio Mane’s goals which handed the West London-based club their first defeat of the season.

Despite Liverpool’s  supremacy and Mane’s brilliance, it wasChelsea goalkeeper, Kepa Arrizabalaga who stole the headlines for the wrong reasons, as he has done quite often in recent times.

The Blues’ goalkeeper played a part in Andreas Christensen’s first-half red card and gifted the Senegalese superstar the second goal at Stamford Bridge.

In a shocking video that has gone viral, Roberto Firmino can be seen directing Arrizabalaga to pass the ball to Mane, a directive the goalkeeper succumbed to under pressure.

Kepa Arrizabalaga quivered under intense pressure and listened to Bobby as an obedient son would and handed the ball to Mane in a failed attempt to pass to a Chelsea player.

The 25-year-old has been under scrutiny for his consistently poor performances and it is obvious that is affecting his output on the field of play.

With a heavy price tag on his shoulders, he has failed to deliver, costing his side vital points by letting in goals he could have prevented.

With Chelsea close to announcing the signing of Edouard Mendy, Frank Lampard will have an array of options to pick from now as they want to fight for trophies in the 2020-2021 season and beyond.