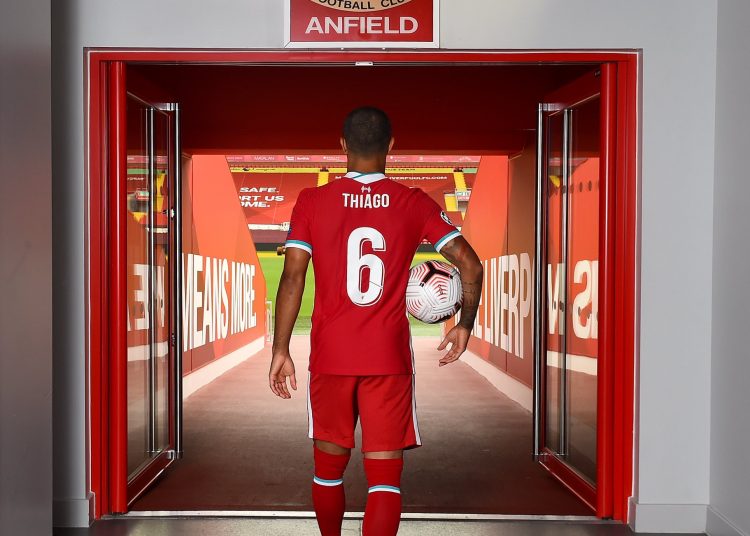 Liverpool’s new signing, Thiago Alcántara has disclosed the one mystical ritual all his colleagues follow at Anfield.

The 29-year-old joined The Reds earlier this month for a deal reported to be worth £20m with the potential for a further £5m in add-ons from Bayern Munich.

It didn’t take Liverpool’s new number 6 shirted player long to make his impact as he showed his class against title contenders, Chelsea at Stamford Bridge.

Not only has found a rhythm on the pitch, but he has also understood the culture of the club after listening to the advice of his countryman, Fernando Torres.

According to Thiago Alcántara, Torres told him not to touch “The Is Anfield” sign until he wins trophies for the club.

“As I heard once from Fernando Torres, this remains heavily the place we passed by for a couple of years, four more years,” Thiago said while looking up at the sign.

“And to touch this symbol we have to deserve it and to win all the trophies we can and so that’s why today I will not [touch the sign]. I will respect this tradition.”

Jürgen Klopp shared the same stance as Thiago over the ‘This Is Anfield’ sign when he arrived at the Merseyside club in 2015.

The 53-year-old German manager told his players they weren’t allowed to touch the sign until they’ve won something with Liverpool.

“I’ve told my players not to touch the ‘This Is Anfield’ sign until they win something. It’s a sign of respect,” Klopp said.

Liverpool won their opening Premier League match 4-3 against Leeds before picking up a win at Chelsea.

The Reds will travel away to Lincoln City for their League Cup clash before resuming their Premier League campaign against Arsenal next week and Thiago Alcántara will be hoping to play an important role in the club’s pursuit to victory.