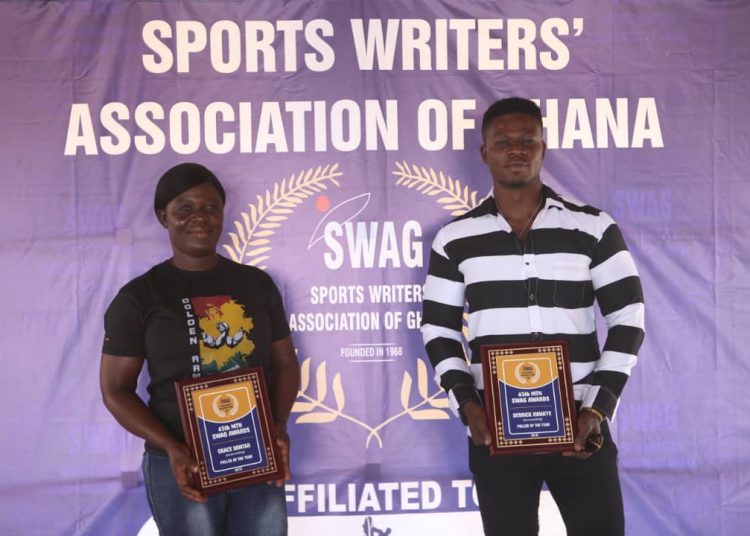 Police Woman Grace Mintah and Kumerica Derrick Adu Kwakye has been adjudged the best Armwrestling athletes of the year after splendid performances in the 2019 Sports season  where they stood tall and grabbed titles that came their way.

Police woman Grace Mintah stood tall amongst a host of female Armwrestlers to win the SWAG female  Armwrestling athlete of the year 2019.

Grace Mintah was Ghana’s brightest spot at the Africa Armwrestling championship in Maly in July 2019.

Penciled as one of the emerging forces in World Armwrestling, Grace Mintah became the new African Queen in Armwrestling winning Gold and Silver medals during the Mali championship.

Kwakye, the undisputed champion of Armwrestling in 2019 won in Brong Ahafo, Western, Ashanti, Greater Accra and the Eastern regions in the National round Robin championship.
Known as Asoka Gh, the 100kg Armwrestler is gifted with superior muscling skills that is able to outwit his counterparts in any championship.

The 45th SWAG MTN Awards will be held at the Splash Alisa Hotel on Saturday October 10, with the Chief Justice gracing the event.

SWAG Awards, the longest running award scheme in Ghana rewards top performing Sports men and Women over the year, and recognises the efforts of persons involved in Sports development.