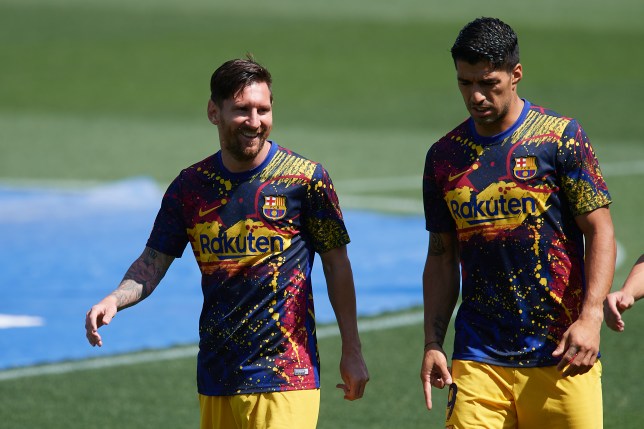 Lionel Messi has aimed a dig at the Barcelona board in his farewell message to his friend and now former teammate Luis Suarez.

The 33-year-old Argentina international was on the brink of leaving Barca this summer, but instead decided to see out the remainder of his contract which expires in 2021.

Nevertheless his feud with the club’s board and president Josep Bartomeu continues. The six-time Ballon d’Or winner has expressed his general unhappiness towards the club on social media on Friday morning in his goodbye message to Suarez, who has joined Atletico Madrid.

“You deserved to leave as what you are: One of the most important players in the club’s history, achieving important things both as a group and individually. And not for them to kick you out like they have done.

But the truth is that at this point nothing surprises me.

Suarez wiped away tears at a news conference on Thursday as he said his goodbyes.

The Uruguayan striker has signed a two-year deal at Atletico, the Spanish clubs confirmed on Wednesday, bringing to an end his six-year stint at the Camp Nou.

Previously known for his mild manner away from the pitch, Messi has stepped up his criticism of Barcelona in the last year.

In January he hit out at then sporting director Eric Abidal, in April he took aim at president Bartomeu and the club’s board for their handling of a pay cut, while in July he gave a fiery post-match interview after a defeat to Osasuna, fiercely criticising the team’s performances on the pitch.

Barca begin their La Liga campaign at home to Villarreal on Sunday.