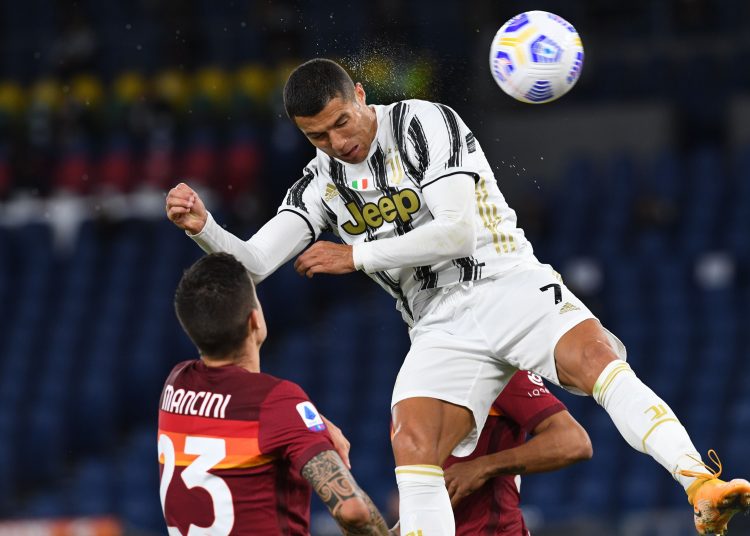 35-year-old Cristiano Ronaldo has proven once again why he should be considered the greatest of all time (GOAT) as he scored what now seems a signature header to help Juventus secure a point against AS Roma.

Juventus were well on their way to a first Serie A defeat of the 2020-2021 season as Roma opened the scoring through Jordan Veretout in the first half.

Ronaldo pulled Juventus back in the game with a penalty but Veretout grabbed his second goal of the night before half-time.

Things got complicated for the Turin-based club as Adrien Rabiot got dismissed from the game on the 62nd-minute.

However, the Portuguese international had a rescue plan mapped out for the Old Ladies as he produced yet another stunning header.

The billion-worthy sports icon leapt highest as he connected with his head a cross from Danilo to save Juventus from a defeat in Rome.

Juventus trailing 2-1 and down to 10 men… BUT they’re always a chance with Ronaldo on the pitch.

Is he human? Unbelievable leap and header for the equaliser 😱#RomaJuve

The goal got fans reacting on social.

Someone has to explain how Cristiano Ronaldo is out here jumping higher than NBA players. Not even the height, it’s the duration of the airtime which makes me wonder if this guy actually decided gravity just ain’t for him.

You know it's Ronaldo when his knee on defender's shoulder level.

Ronaldo just did this pic.twitter.com/quCS1IwUMY

Juventus are a Man down and Ronaldo still steps up to rescue, you can't beat this guy 🐐

Juventus now sit fourth on the league leg and will play Napoli next Sunday.